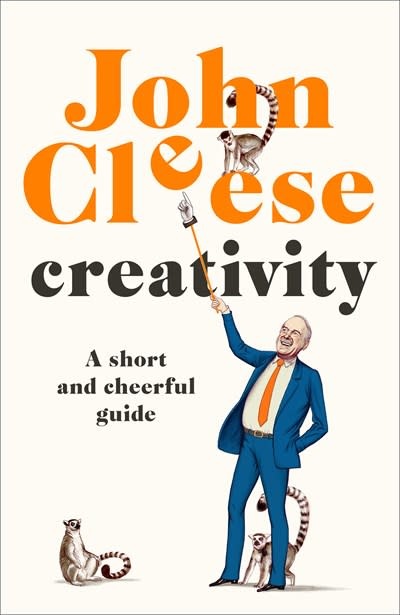 “Many people have written about creativity, but although they were very, very clever, they weren’t actually creative. I like to think I’m writing about it from the inside.”—John Cleese

Creativity is usually regarded as a mysterious, rare gift that only a few possess. John Cleese begs to differ, and in this short, immensely practical, and often very amusing guide he shows it’s a skill that anyone can acquire. Drawing on his lifelong experience as a writer, he shares his insights into the nature of the creative process and offers advice on how to get your own inventive juices flowing. What do you need to do to get yourself in the right frame of mind? When do you know that you’ve come up with something that might be worth pursuing? What do you do if you think you’ve hit a brick wall?

Not only does he explain the way your mind works as you search for inspiration, he also shows that, regardless of the task you’ve set yourself, you can learn to be better at coming up with a promising idea, refining it, and knowing when you’re ready to act on it.

We can all be more creative. John Cleese shows us how.

John Cleese is an English actor, comedian, writer, and film producer. He achieved success at the Edinburgh Festival Fringe and as a scriptwriter and performer on The Frost Report. In the late 1960s, he co-founded Monty Python, the comedy troupe responsible for the sketch show Monty Python’s Flying Circus and the four Monty Python films, And Now for Something Completely Different, Monty Python and the Holy Grail, Life of Brian, and The Meaning of Life. In the mid-1970s, Cleese and his first wife, Connie Booth, co-wrote and starred in the British sitcom Fawlty Towers. Later, he co-starred with Kevin Kline, Jamie Lee Curtis, and former Python colleague Michael Palin in A Fish Called Wanda and Fierce Creatures. He also starred in Clockwise, and has appeared in many other films, including two James Bond films, two Harry Potter films, and the last three Shrek films.