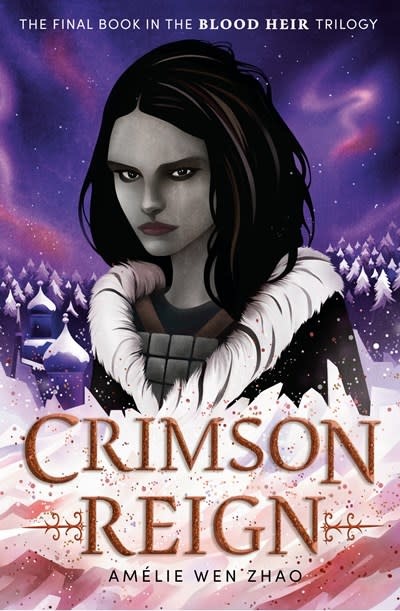 For fans of Children of Blood and Bone and Six of Crows comes the thrilling conclusion to the Blood Heir trilogy. A princess with a dark secret must ally with a con man to liberate her empire from a reign of terror in this epic fantasy retelling of the Anastasia story.

The Red Tigress, Ana Mikhailov, has returned to Cyrilia, but the country she once called home has fallen under a dark rule. Across the land, the Empress Morganya is tightening her grip on Affinites and non-Affinites alike. Ana dealt a blow to the Empress when she and her allies turned back Morganya’s troops in Bregon, but she couldn’t stop Morganya from gaining possession of the last remaining Bregonian siphon: a dangerous new weapon with the power to steal Affinities.

Ana’s forces are scattered, and her tenuous alliance with the Cyrilian rebel group, the Red Cloaks, is becoming more frayed by the day. What’s worse, she’s lost her Affinity to blood and without it, Ana barely knows who she is anymore—or if she has the strength to defeat Morganya.

Morganya’s reign of terror is close to crushing the nation Ana was born to rule. And now Ana will finally face the sinister empress, but will she survive? Will anyone? And will her Empire welcome her back to the throne, or turn her out to survive on her own.

Amélie Wen Zhao was born in Paris and grew up in Beijing in an international community. Her multicultural upbringing instilled in her a deep love of global affairs and cross-cultural perspectives. She seeks to bring this passion to her stories, crafting characters from kingdoms in different corners of the world. She attended college in New York City, where she now lives. Amélie is the author of the Blood Heir trilogy Blood Heir, Red Tigress, and Crimson Reign.