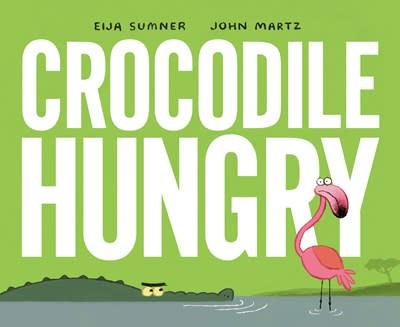 A hilarious story about a hungry and hapless crocodile, for fans of How to Give Your Cat a Bath and I Want My Hat Back.

What can crocodile eat?

Canned ham? Too hard to open.

Beef jerky? Gets stuck in teeth.

Crocodile must find food. But where?

Though crocodile is surrounded by food, he doesn’t know it. He’s used to food coming in packages and boxes and in handy tins. Will the hungry crocodile figure it out?

Readers big and little will laugh out loud at the simple but hysterical text and illustrations by debut author Eija Sumner and cartoonist (and now resident crocodile expert) John Martz.

EIJA SUMNER has an MFA from Hamline University in writing for children and young adults. While a student at Hamline, Eija received the T.A. Barron Fellowship for Excellence in Fantasy Writing, the Anne Tews Schwab Award for Excellence in Critical Writing and the Frances and Kermit Rudolf Scholarship Award. She lives in Idaho with her husband, three children, two cats and one red-eyed bunny (but no crocodiles).

JOHN MARTZ is an illustrator, cartoonist and designer. He is the author and illustrator of Evie and the Truth About Witches, Burt's Way Home, A Cat Named Tim and Other Stories and Destination X, and the illustrator of How to Give Your Cat a Bath, Dear Flyary and Who's On First?. His work can also been seen in The Nib. John is the art director for Penguin Random House Canada Young Readers. He lives in Toronto and has never eaten a flamingo.