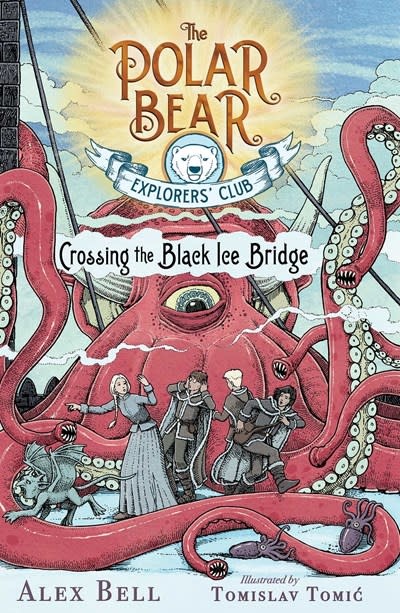 In the final book of the whimsical Polar Bear Explorers’ Club series, Stella and the gang go on their most perilous adventure yet to find a cure for their cursed friend.

Stella Starflake Pearl has been expelled from the Polar Bear Explorers’ Club.

But that’s not going to stop her and the rest of the junior explorers from embarking on another exceptionally perilous expedition. It hasn’t been long since Shay was bitten by a witch wolf, but he’s in danger of turning into one himself. Only an ice queen’s long-lost spell book and Stella’s ice princess magic has the power to break the curse. The one thing standing in their way is a treacherous monolith no explorer has ever returned from…the Black Ice Bridge.

In this final, daring installment of the Polar Bear Explorers’ Club series, Stella and the rest of the gang embark on their most fearsome quest yet, plagued by distrustful mermaids, screeching red devil squids, irksome trolls, and a centuries-old curse.

Alex Bell has always wanted to be a writer but had several different back up plans to ensure she didn’t end up in the poor house first. After training as a lawyer, she now works at the Citizens Advice Bureau, a legal advice firm in the UK. Most of her spare time consists of catering to the whims of her Siamese cat.

Tomislav Tomic graduated from the Academy of Fine Arts in Zagreb, Croatia. He started publishing his illustrations during his college days, and since then has illustrated a great number of books, picture books, school books, and many covers for children’s books. He lives and works in Zaprešic, Croatia.