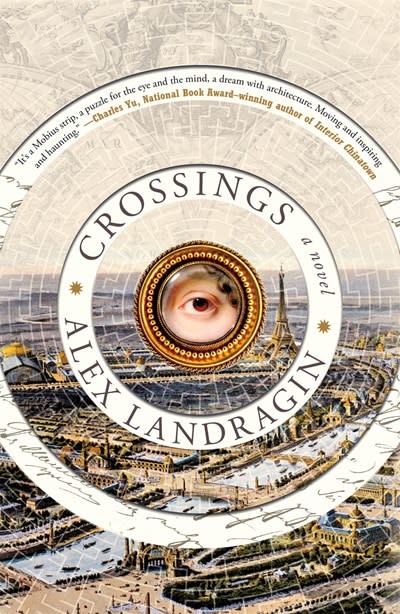 Crossings is an unforgettable and explosive genre-bending debut—a novel in three parts, designed to be read in two different directions, spanning a hundred and fifty years and seven lifetimes.

In this mesmerizing, genre-bending debut, Alex Landragin has created an intricate literary puzzle designed to be read either as a first-to-last-page narrative or by following an alternative chapter sequence that offers a very different reading experience.

A parisian bookbinder is tasked with binding a manuscript called Crossings for a reputable bibliophile. When he goes to deliver the finished book to her, he learns she has been murdered and mutilated. He believes the crime is somehow connected to the manuscript, so, disregarding his client's wishes, he reads it. What he discovers is a dazzling story consisting of three narratives, each as unlikely as the next. The first is a ghost story penned by infamous nineteenth-century French poet Charles Baudelaire for an illiterate girl. The second is a noir romance set in Paris on the eve of the Nazi occupation, purporting to be the work of exiled German Jewish philosopher Walter Benjamin. The third is the fantastical memoir of a woman claiming to inhabit many lives across many lifetimes as she searches for her lost love.

As the connections between this cast of unforgettable characters grow, their stories merge into an extraordinary tale of separated lovers held captive by an ancient law, finding and losing love again and again.

Crossings is a novel to remember, full of sophisticated erudition, magical storytelling, and historical romance.

ALEX LANDRAGIN is a French-Armenian-Australian writer currently based in Melbourne, Australia. He has previously worked as a librarian, an indigenous community worker and an author of Lonely Planet travel guides in Australia, Europe and Africa. Alex holds an MA in Creative Writing from the University of Melbourne and occasionally performs early jazz piano under the moniker Tenderloin Stomp. Crossings is his debut novel.