Home » Cuphead in A Mountain of Trouble 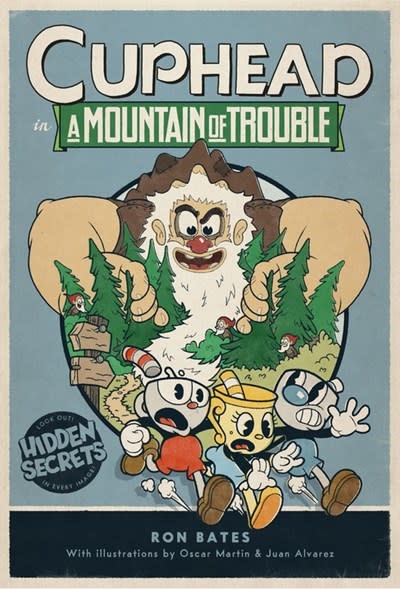 Cuphead in A Mountain of Trouble

Gather 'round the campfire for s'more Cuphead adventures! An original novel based on the award-winning and visually stunning Cuphead video game, featuring twenty original illustrations and an interactive treasure hunt.

School's out, which can only mean one thing: camp! Cuphead has been looking forward to going to Camp Hootenholler for ages. He can't wait to shoot some archery, swim in the lake, and sit around and do nuthin' at all. When he and his best buds, Mugman and Ms. Chalice, arrive, they learn about the camp's bitter rivalry with their neighbors, Camp Punchafink, and discover that a menacing mountain, Glumstone the Giant, is watching over both camps, ready to bring down a fierce punishment upon whichever camp gets on its bad side!

Before long, the two camps go head-to-head in an all-out prank war. But one night, after a midnight raid on the Punchafinks, Cuphead and his friends wake the grumpy and powerful Glumstone. Yikes! Glumstone the Giant, amused, tells them that he's never heard of any "curse," but that it gives him an idea. Glumstone is tired of being disturbed by the camps' high jinks, so he decides that whichever camp loses the annual Camp-etition will have to shut down.

Can the Hootenhollers rally together to take down the Punchafinks, or will the campers be sent packing?

Includes over twenty never-before-seen illustrations drawn by Oscar Martin and Julian Alvarez that feature hidden items for an interactive treasure hunt! Cuphead in a Mountain of Trouble is the second book in an original series and perfect for players of Cuphead and readers of Hello Neighbor, Bendy and the Ink Machine, and Five Nights at Freddy's.

Ron Bates is a novelist who writes about secret laboratories, bullies, evil robots, toilet monsters, super plumbers, cafeteria tacos, and all the other things that make being a middle-school student so interesting. A former newspaper reporter and humor columnist, he is the author of How to Make Friends and Monsters, How to Survive Middle School and Monster Bots, and The Unflushables. He also writes comic books, poems, and other stuff for kids who like to laugh. He lives in Texas.

Oscar Martin has worked on brands like Tom & Jerry and The Lion King and has worked with Disney, Egmont, Warner Bros., and Casterman. Today he continues to produce books about his character Solo from his company, OMINIKY Ediciones. He creates style guides for WB, works on brands such as Disney, and illustrates charismatic characters for the European market. Most recently, he's been requested for the design and development of animated films.

Juan Alvarez is a cartoonist who was trained at the Madrid School of Art No. 10 and the Higher School of Professional Drawing (ESDIP). In 2019, he was part of the ink & paint department for Klaus, an animated film from SPA. He currently works as a freelance illustrator.