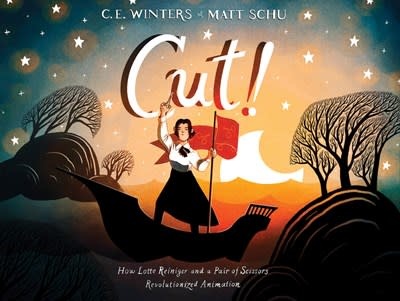 Long before Walt Disney, a young woman revolutionized the landscape of animation using light, a pair of scissors, and her imagination. From acclaimed author C. E. Winters and debut illustrator Matt Schu, STEM meets the arts in this engaging nonfiction picture book biography about Lotte Reiniger. Cut! is an exceptional choice for classrooms and for readers of Hidden Figures, I Dissent, and the Questioneers books.

In the 1920s, when young women had limited opportunities, Lotte Reiniger used her curiosity and ingenuity to change the landscape of animation forever. Inspired by the films of her youth, and encouraged by teachers and mentors working in film at the time, Lotte Reiniger honed her skills in cutting out paper silhouettes to use in stop-motion animation.Eventually, her talent and her drive led her to invent the multiplane camera, which allowed her to give her animation depth of field. With her small team, Lotte designed and directed the oldest full-length animated film in existence.Acclaimed author C. E. Winters and debut artist Matt Schu expertly introduce young readers to Lotte Reiniger, a remarkable and often overshadowed historical figure. Balancing biographical information with a compelling story, the engaging and accessible text follows Lotte Reiniger from childhood to her first groundbreaking accomplishments. Matt Schu’s dynamic illustrations draw inspiration from Reiniger’s own artistry, and are full of detail, color, and light. Cut! is an excellent nonfiction picture book perfect for classrooms and family sharing. Features extensive backmatter, including a timeline of Lotte Reiniger’s life, an author’s note, and sources.

C. E. Winters fell in love with movies when she was a little girl in Southern California. She holds degrees in drama and English from the University of California, Irvine, and writes award-winning historical novels for teens and adults under the name Cat Winters. She has been named a William C. Morris Debut YA Award finalist, a Bram Stoker Award nominee, and an Oregon Spirit Book Award winner, and her novels have appeared on Kirkus, School Library Journal, and Booklist best-of-the-year lists. C. E. Winters lives in Hillsboro, Oregon, which, incidentally, is the home of a major animation studio.Matt Schu studied art and design at the University of Oregon. He previously worked as a graphic designer, and now he is a full-time artist and illustrator. This is his first book for children. Matt Schu lives in Portland, Oregon.