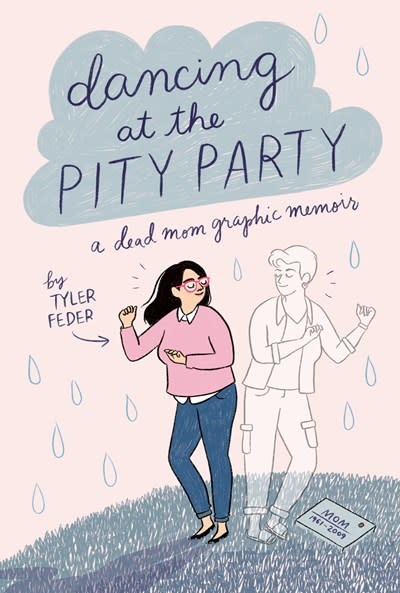 Dancing at the Pity Party: A Dead Mom Graphic Memoir

From before her mother’s first oncology appointment through the stages of her cancer to the funeral, sitting shiva, and afterward, when she must try to make sense of her life as a motherless daughter, Tyler Feder tells her story in this graphic novel that is full of piercing—but also often funny—details. She shares the important post-death firsts, such as celebrating holidays without her mom, the utter despair of cleaning out her mom’s closet, ending old traditions and starting new ones, and the sting of having the “I’ve got to tell Mom about this” instinct and not being able to act on it. This memoir, bracingly candid and sweetly humorous, is for anyone struggling with loss who just wants someone to get it.

Tyler Feder is a full-time illustrator based in Chicago. She graduated from Northwestern University in 2011 with a BA in Radio/TV/Film and a certificate in Creative Writing for the Media. She further honed her comedic skills at the Second City Training Center, where she graduated from the writing program. In 2012, Tyler began posting her artwork online, and within five years she had grown her illustration company, Roaring Softly, into a recognizable brand with a mix of witty pop culture art and intersectional feminist pieces. She has illustrated for Netflix, Comedy Central, and ESPN, and is the illustrator of Cristen Conger and Caroline Ervin’s Unladylike.