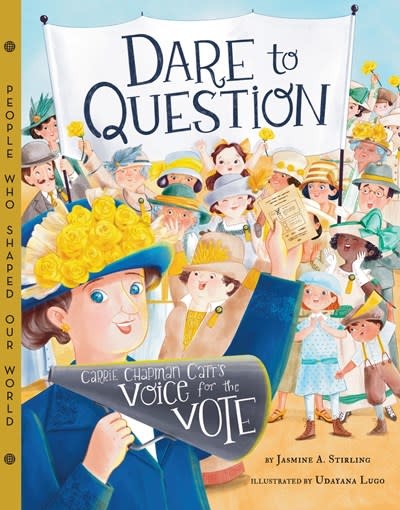 Jasmine Stirling, author of A Most Clever Girl: How Jane Austen Discovered Her Voice, delivers a powerful, poetic picture book biography about suffragist Carrie Chapman Catt, perfect for fans of I Dissent: Ruth Bader Ginsburg Makes Her Mark and the Rebel Girls series.

As a child, Carrie Chapman Catt asked a lot of questions: How many stars are in the sky? Do germs have personalities? And why can’t Mama vote? Catt’s curiosity led her to college, to a career in journalism, and finally to becoming the president of The National American Woman Suffrage Association. Catt knew the movement needed a change—and she set to work mobilizing women (and men) across the nation to dare to question a woman’s right to vote.

On August 18, 1920, Catt pinned a yellow rose to her dress and waited while lawmakers in Tennessee cast their deciding votes to ratify the 19th Amendment to the Constitution of the United States of America. After a seventy-year campaign, had women finally won the right to vote?

Stirling's suspenseful retelling of the dramatic final "yea" that changed the history of women’s rights brings the past to life for young readers.

Jasmine A. Stirling is a proud voter and advocate for women's rights. She is also the award-winning author of A Most Clever Girl: How Jane Austen Discovered Her Voice. Jasmine lives in San Francisco with her spouse, two daughters, and their dog. Visit her at jasmineastirling.com.

Udayana Lugo would probably be a baker if she weren’t a children’s book illustrator (although waking up before dawn might be a deal-breaker!). She lives in British Columbia, Canada, with her family. Visit her at udayana-lugo.com.