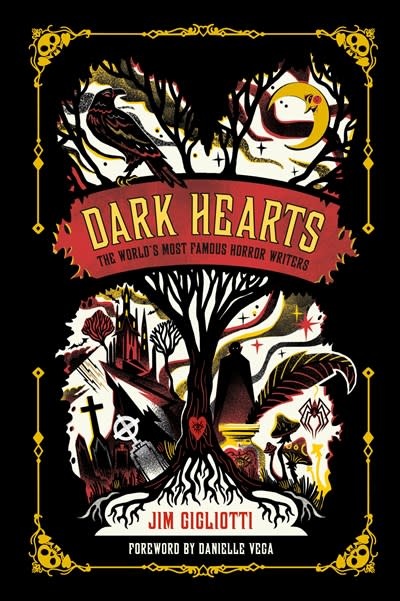 Sometimes the truth can be much scarier than fiction. And this collection is no exception. Uncover what fascinated and frightened some of our favorite horror writers of all time.

Who are the people who make our hearts race and our minds spin? Why are they so good at making us fear what goes bump in the night? What are the stories behind the writers who give us goosebumps? Dark Hearts is a collection of fourteen short biographies of the world’s best-known horror writers, including Mary Shelley, Shirley Jackson, Neil Gaiman, R. L. Stine, Stephen King, Bram Stoker, and others. Their stories are gathered in this beautiful, gift-able book that is perfect for any horror fan.

Jim Gigliotti is a writer based in Southern California. A former editor at the National Football League, he has written more than 50 books for readers of all ages, including biographies for young readers on Olympian Jesse Owens, baseball star Roberto Clemente, and musician Stevie Wonder.

Karl James Mountford is an illustrator who works in both traditional and digital media. He has created artwork for such titles as 'The Uncommoners' by Jennifer Bell and 'The Peculiars' by Kieran Larwood. Karl currently lives and works in Wales, where his sketch books rarely get a day off.