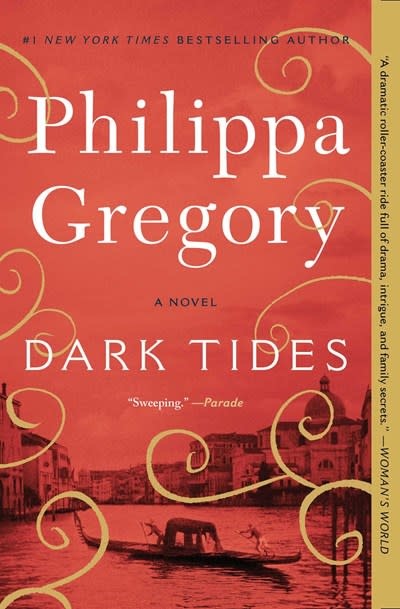 #1 New York Times bestselling author of Tidelands—the “searing portrait of a woman that resonates across the ages” (People)—returns with an evocative historical novel tracking the rise of the Tidelands family in London, Venice, and New England.

Midsummer Eve 1670. Two unexpected visitors arrive at a shabby warehouse on the south side of the River Thames. The first is a wealthy nobleman seeking the lover he deserted twenty-one years earlier. Now James Avery has everything to offer: a fortune, a title, and the favor of the newly restored King Charles II. He believes that the warehouse’s poor owner Alinor has the one thing he cannot buy—his son and heir.

The second visitor is a beautiful widow from Venice in deepest mourning. She claims Alinor as her mother-in-law and tells her of the death of Rob—Alinor’s son—drowned in the dark tides of the Venice lagoon.

Meanwhile, Alinor’s brother Ned, in faraway New England, is making a life for himself between in the narrowing space between the jarring worlds of the English newcomers and the American Indians as they move towards inevitable war. Alinor writes to him that she knows—without doubt—that her son is alive and the widow is an imposter. But how can she prove it?

Set in the poverty and glamour of Restoration London, in the golden streets of Venice, and on the tensely contested frontier of early America, this is a novel of greed and desire: for love, for wealth, for a child, and for home.

PHILIPPA GREGORY is one of the world’s foremost historical novelists. She wrote her first ever novel, Wideacre, when she was completing her PhD in eighteenth-century literature and it sold worldwide, heralding a new era for historical fiction.

Her flair for blending history and imagination developed into a signature style and Philippa went on to write many bestselling novels, including The Other Boleyn Girl and The White Queen.

Philippa is a member of the Society of Authors and in 2016 was presented with the Outstanding Contribution to Historical Fiction Award by the Historical Writers’ Association. In 2018, she was awarded an Honorary Platinum Award by Neilsen for achieving significant lifetime sales across her entire book output.

She welcomes visitors to her site www.PhilippaGregory.com.