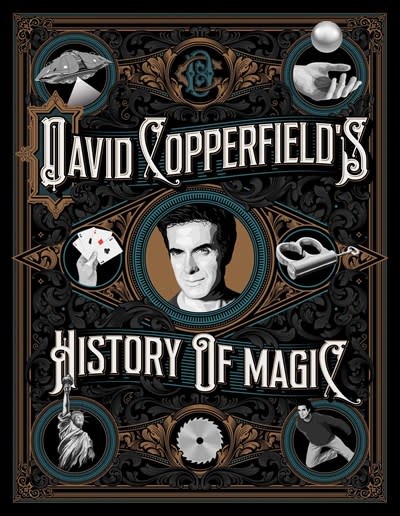 An illustrated, illuminating insight into the world of illusion from the world’s greatest and most successful magician, capturing its audacious and inventive practitioners, and showcasing the art form’s most famous artifacts housed at David Copperfield’s secret museum.

In this personal journey through a unique and remarkable performing art, David Copperfield profiles twenty-eight of the world’s most groundbreaking magicians. From the 16th-century magistrate who wrote the first book on conjuring to the roaring twenties and the man who fooled Houdini, to the woman who levitated, vanished, and caught bullets in her teeth, David Copperfield’s History of Magic takes you on a wild journey through the remarkable feats of the greatest magicians in history.

These magicians were all outsiders in their own way, many of them determined to use magic to escape the strictures of class and convention. But they all transformed popular culture, adapted to social change, discovered the inner workings of the human mind, embraced the latest technological and scientific discoveries, and took the art of magic to unprecedented heights.

The incredible stories are complimented by over 100 never-before-seen photographs of artifacts from Copperfield’s exclusive Museum of Magic, including a 16th-century manual on sleight of hand, Houdini’s straightjackets, handcuffs, and water torture chamber, Dante’s famous sawing-in-half apparatus, Alexander’s high-tech turban that allowed him to read people’s minds, and even some coins that may have magically passed through the hands of Abraham Lincoln.

By the end of the book, you’ll be sure to share Copperfield’s passion for the power of magic.

David Copperfield has been hailed by critics as the greatest illusionist of our time. He was described by Forbes magazine as the most commercially successful magician in history. He has won twenty-one Emmy awards, was the first living illusionist to be given a star on the Hollywood Walk of Fame, and was named a Living Legend by the United States Library of Congress.

Richard Wiseman is a professor of psychology, author, and magician. He is a Member of the Inner Magic Circle, has created illusion-based videos that have received over 500 million views on YouTube, and has authored several bestselling books.

David Britland is a writer and consultant on all aspects of deception. He has written several highly regarded books on magic and is a recipient of the Special and Literary Fellowship from the Academy of Magical Arts in Los Angeles.

Homer Liwag is an acclaimed visual designer, photographer, cinematographer, artist, and magician. For two decades he has codirected David Copperfield’s live and television work, and collaborated as his Design Director.