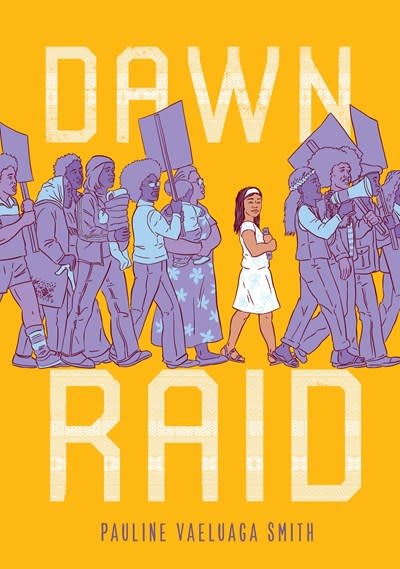 "Imagine this: You're having an amazing family holiday, one where everyone is there and all 18 of you are squeezed into one house. All of sudden it's 4 o'clock in the morning and there's banging and yelling and screaming. The police are in the house pulling people out of bed ..."

Sofia is like most 12-year-old girls in New Zealand. How is she going to earn enough money for those boots? WHY does she have to give that speech at school? Who is she going to be friends with this year?

It comes as a surprise to Sofia and her family when her big brother, Lenny, starts talking about protests, "overstayers", and injustices against Pacific Islanders by the government. Inspired by the Black Panthers in America, a group has formed called the Polynesian Panthers, who encourage immigrant and Indigenous families across New Zealand to stand up for their rights. Soon the whole family becomes involved in the movement.

Told through Sofia's diary entries, with illustrations throughout, Dawn Raid is the story of one ordinary girl living in extraordinary times, learning how to stand up and fight.

Dawn Raid is the first book by Pauline Vaeluaga Smith, for which she received Best New Author at the New Zealand Book Awards and a NZ Storylines Notable Book Award. Pauline's heritage is Samoan, Tuvaluan, Scottish and Irish. Her work is heavily influenced by her experiences growing up in the 1970s, her roles as a teacher and university educator, her passion for civil rights and justice, and her deep interest in uplifting NZ Maori culture. She lives in a small seaside town at the bottom of the South Island of Aotearoa-New Zealand.

Mat Hunkin is an illustrator and comics artist from New Zealand. His day job is in the film industry.