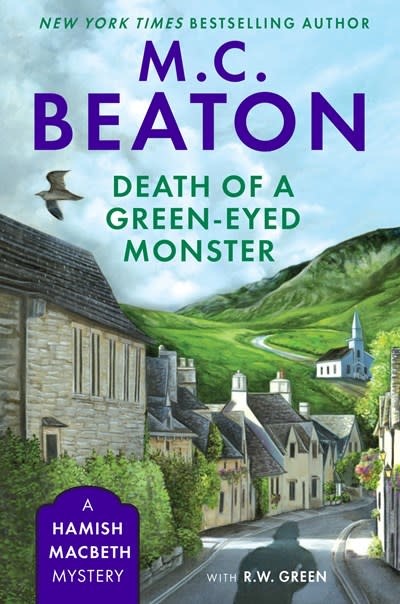 Death of a Green-Eyed Monster: A Hamish Macbeth mystery novel

Sergeant Hamish Macbeth—Scotland's most quick-witted but unambitious policeman—is back and may have finally met the woman of his dreams in this new mystery in M.C. Beaton's beloved, New York Times bestselling series.

Hamish's new constable, Dorothy McIver, may be the most beautiful woman he's ever seen. Completely bewitched by her sparkling blue eyes, Hamish spends the summer traveling with her up and down Sutherland until finally, he can take it no longer. He gets down on one knee beside the Land Rover and begs her to marry him—and to his amazement and delight, she says yes.

But just as the town of Lochdubh gets ready to celebrate, Hamish finds himself with a new murder on his hands. If he doesn't find the killer fast, Hamish's dream wedding could become a nightmare.

M. C. Beaton, hailed as the "Queen of Crime" by the Globe and Mail, was the author of the New York Times and USA Today bestselling Agatha Raisin novels—the basis for the hit series on Acorn TV and public television—as well as the Hamish Macbeth series and the Edwardian Murder Mysteries featuring Lady Rose Summer. Born in Scotland, Beaton started her career writing historical romances under several pseudonyms as well as her maiden name, Marion Chesney. She passed away in 2019.