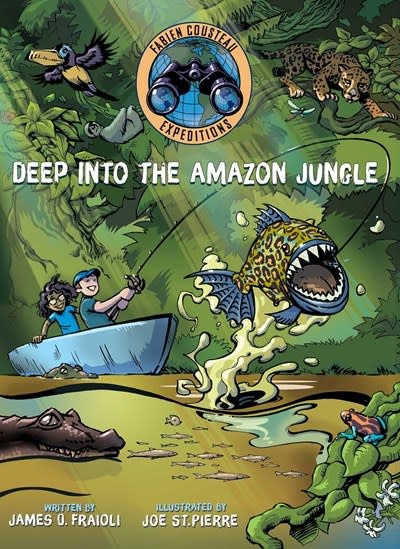 Two young explorers journey with Fabien Cousteau into the depths of the Amazon Jungle to find a new species of piranha in this next colorful installment of the Fabien Cousteau Expeditions graphic novel series.

Set sail with junior explorers Will and Jacklyn as they embark on a riverboat journey from Iquitos, Peru, into the Amazon Jungle with Fabien Cousteau and his crew of scientists. They are responding to rumors of a new species of giant piranha, intending to prove the piranhas’ existence and determine whether they are dangerous to people living nearby. But the Amazon is estimated to be home to one-third of the world’s plant and animal species, so along the way the team will also encounter dolphins, vampire bats, colorful macaws, poisonous frogs, and countless other wonders that call this great rainforest home.

Vibrant and dramatic illustrations accompany this riverside adventure that introduces young readers to the diverse populations that reside in the Amazon. Kids will also learn about the consequences of deforestation for our entire planet—as well as the numerous ways that every person can do their share to preserve our forests, reduce waste, and help the environment.

Fabien Cousteau is the grandson of famed sea explorer Jacques Cousteau, and a third-generation ocean explorer and filmmaker. He has worked with National Geographic, Discovery, PBS, and CBS to produce ocean exploration documentaries and continues to produce environmentally-oriented content for schools, books, magazines, and newspapers. Learn more about his work at FabienCousteauOLC.org.

James O. Fraioli is a published author of twenty-five books and an award-winning filmmaker. Fraioli has traveled the globe alongside experienced guides, naturalists, and scientists, and has spent considerable time exploring and writing about the outdoors. He has served on the Board of Directors for the Seattle Aquarium and works with many environmental organizations. Learn more about his work at VesperEntertainment.com.