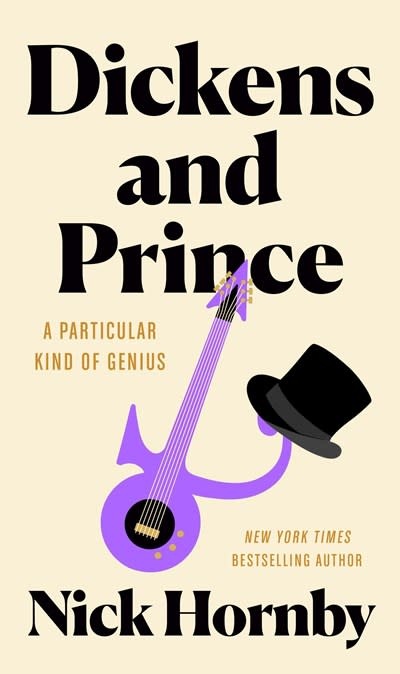 From the bestselling author of Just Like You, High Fidelity, and Fever Pitch, a short, warm, and entertaining book about art, creativity, and the unlikely similarities between Victorian novelist Charles Dickens and modern American rock star Prince

Every so often, a pairing comes along that seems completely unlikely—until it’s not. Peanut butter and jelly, Dennis Rodman and Kim Jong Un, ducks and puppies, and now: Dickens and Prince.

Equipped with a fan’s admiration and his trademark humor and wit, Nick Hornby invites us into his latest obsession: the cosmic link between two unlikely artists, geniuses in their own rights, spanning race, class, and centuries—each of whom electrified their different disciplines and whose legacy resounded far beyond their own time.

When Prince’s 1987 record Sign o’ the Times was rereleased in 2020, the iconic album now came with dozens of songs that weren’t on the original— Prince was endlessly prolific, recording 102 songs in 1986 alone. In awe, Hornby began to wonder, Who else ever produced this much? Who else ever worked that way? He soon found his answer in Victorian novelist and social critic Charles Dickens, who died more than a hundred years before Prince began making music.

Examining the two artists’ personal tragedies, social statuses, boundless productivity, and other parallels, both humorous and haunting, Hornby shows how these two unlikely men from different centuries “lit up the world.” In the process, he creates a lively, stimulating rumination on the creativity, flamboyance, discipline, and soul it takes to produce great art.

Nick Hornby is the author of seven bestselling novels, including High Fidelity, About a Boy, and A Long Way Down, as well as several works of nonfiction. Many of his books have been turned into successful films and TV series. He has been Oscar nominated twice, for his screenplays of An Education and Brooklyn. His ten-part short-form TV series State of the Union, directed by Stephen Frears, was recently broadcast by Sundance TV and the BBC and won three Emmy Awards. He lives in London.