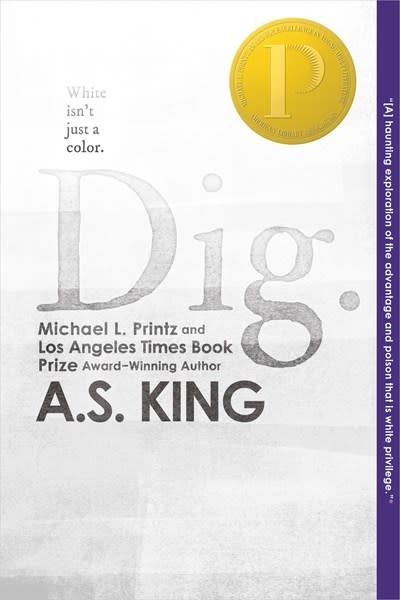 Winner of the Michael L. Printz Prize, now available in paperback. Surreal and searing, Dig dives into the tangled secrets of a wealthy white family and the terrible cost the family’s grandchildren pay to maintain the family name.

★“King’s narrative concerns are racism, patriarchy, colonialism, white privilege, and the ingrained systems that perpetuate them…. [Dig] will speak profoundly to a generation of young people who are waking up to the societal sins of the past and working toward a more equitable future.”—Horn Book, starred review

Five estranged cousins are lost in a maze of their family’s tangled secrets. Their grandparents, former potato farmers Gottfried and Marla Hemmings, managed to trade digging spuds for developing subdivisions and now they sit atop a million-dollar bank account—wealth they’ve refused to pass on to their adult children or their five teenage grandchildren. “Because we want them to thrive,” Marla always says.

But for the Hemmings cousins, “thriving” feels a lot like slowly dying of a poison they started taking the moment they were born. As the rot beneath the surface of the Hemmings’ white suburban respectability destroys the family from within, the cousins find their ways back to one another, just in time to uncover the terrible cost of maintaining the family name.

With her inimitable surrealism, award winner A.S. King exposes how a toxic culture of polite white supremacy tears a family apart and how one determined generation can dig its way out.

A.S. King is the critically acclaimed author of many novels for young adults and middle readers, including Still Life with Tornado. Her fiction has earned numerous awards, including an LA Times Book Prize, a Printz Honor, and over fifty starred reviews.The New York Times called her “one of the best YA writers working today.” She lives in Pennsylvania with her family.