Home » Dignity in a Digital Age: Making Tech Work for All of Us 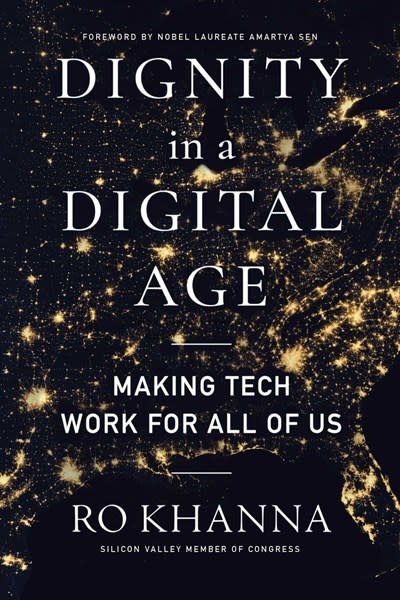 Dignity in a Digital Age: Making Tech Work for All of Us

Congressman Ro Khanna offers a revolutionary roadmap to facing America’s digital divide, offering greater economic prosperity to all. In Khanna’s vision, “just as people can move to technology, technology can move to people. People need not be compelled to move from one place to another to reap the benefits offered by technological progress” (from the foreword by Amartya Sen, Nobel Laureate in Economics).

In the digital age, unequal access to technology and the revenue it creates is one of the most pressing issues facing the United States. There is an economic gulf between those who have struck gold in the tech industry and those left behind by the digital revolution; a geographic divide between those in the coastal tech industry and those in the heartland whose jobs have been automated; and existing inequalities in technological access—students without computers, rural workers with spotty WiFi, and plenty of workers without the luxury to work from home.

Dignity in the Digital Age tackles these challenges head-on and imagines how the digital economy can create opportunities for people all across the country without uprooting them. Congressman Ro Khanna of Silicon Valley offers a vision for democratizing digital innovation to build economically vibrant and inclusive communities. Instead of being subject to tech’s reshaping of our economy, Representative Khanna argues that we must channel those powerful forces toward creating a more healthy, equal, and democratic society.

Born into an immigrant family, Khanna understands how economic opportunity can change the course of a person’s life. Anchored by an approach Khanna refers to as “progressive capitalism,” he shows how democratizing access to tech can strengthen every sector of economy and culture. By expanding technological jobs nationwide through public and private partnerships, we can close the wealth gap in America and begin to repair the fractured, distrusting relationships that have plagued our country for far too long.

Moving deftly between storytelling, policy, and some of the country’s greatest thinkers in political philosophy and economics, Khanna presents a bold vision we can’t afford to ignore. Dignity in a Digital Age is a roadmap to how we can seek dignity for every American in an era in which technology shapes every aspect of our lives.

Ro Khanna represents Silicon Valley in Congress. He has taught economics at Stanford, served as Deputy Assistant Secretary of Commerce in the Obama Administration, and represented tech companies and startups in private practice. He enjoys spending time with his wife and two young children in Washington, DC, and Fremont, California.