Home » Dimension Why #1: How to Save the Universe Without Really Trying 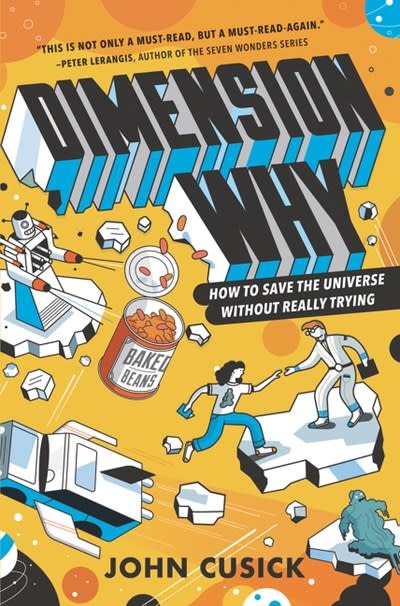 Dimension Why #1: How to Save the Universe Without Really Trying

A thirty-first-century boy and a twenty-first-century girl team up to save the universe, evade an evil race of bog mutants, and visit the ball pit on the moon in the first book of a jaw-droppingly hilarious duology by middle grade debut author John Cusick.

Phineas T. Fogg has everything a thirty-first-century boy could want—everything, that is, except adventure. His overprotective parents have never allowed him to leave his high-tech apartment— not to ride the roller-coaster serpents of Neptune 2, not to sail the ultrablack sea of the Frillian Riviera, not even to check out the ball pit on the moon. But, deep inside, he’s always known that he’s destined for something great. He’s always secretly felt . . . chosen.Unfortunately for Phin, he isn’t the Chosen One—but he does know her. Lola Ray was a normal twenty-first-century girl until a poorly timed sneeze in an X-ray machine flung her a thousand years into the future. Now she’s desperate to get home to her family. But first, she and Phin will have to survive the bog mutants, a baked bean in a very nice suit, and a mysterious invitation to tea. Oh, and escape a race of all-powerful interdimensional beings who are convinced that Lola knows the answer. The answer to the universe’s biggest question . . . the question of The End.Pop open some UltraCrisps and get ready to explore the galaxy in this hilarious adventure series by your new best friend, John Cusick.

John Cusick is an author and literary agent. He lives in Brooklyn, NY, with his wife and a large orange cat named Donut. Records indicate he was born in Worcester, MA. There is no hard evidence to suggest Mr. Cusick is from outer space, and frankly we don’t know how these rumors get started.