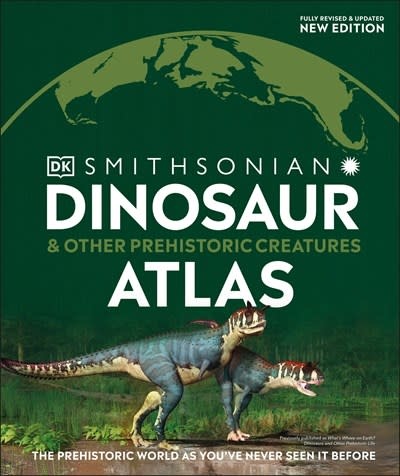 Dinosaur and Other Prehistoric Creatures Atlas

Journey back in time and find out where dinosaurs roamed. This unique children’s atlas explores each continent, revealing fossil sites and stories on every map.

This atlas is packed with maps of early Earth and more than 40 profiles of dinosaurs and other prehistoric animals. Stare down a T. rex in North America. Watch out for Velociraptors’ slashing claws in the Gobi Desert. Trek across the Siberian tundra and discover a woolly mammoth. This stunning book uses breathtaking computer-generated imagery to make every animal come to life.

Using specially commissioned maps, this dinosaur atlas also shows you what the world looked like millions of years ago. A modern 3-D globe next to each map helps you understand the arrangement of the continents over time and why we find fossils where we do. You can see what paleontologists have dug up on each continent and learn how they put together a picture of the past from a puzzle of ancient clues.

Dinosaur Atlas reveals the prehistoric world as never before, and is an essential addition to the library of every young dinosaur expert.

Darren Naish is a renowned palaeontologist. He has appeared on television including BBC News 24, Channel 4’s Sunday Brunch, and Richard and Judy. He has written, or consulted on, a number of books, including DK’s Dinosaurs: A Children’s Encyclopedia and Dinosaurs: How They Lived and Evolved (Natural History Museum). Most recently, he acted as consultant for the interactive exhibition Dinosaurs in the Wild, in London.

Chris Barker is a palaeontologist, holding degrees in Palaeobiology and Vertebrate Palaeontology. He has published

his research widely, both in acclaimed academic journals such as the Scientific Reports (part of Nature) and popular newspapers such as The Guardian.