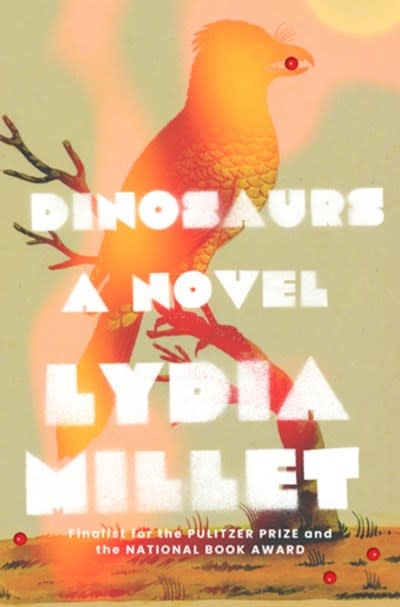 A stunning new novel from the author of A Children’s Bible, a National Book Award finalist and one of the New York Times' 10 Best Books of 2020.

Over twelve novels and two collections Lydia Millet has emerged as a major American novelist. Hailed as “a writer without limits” (Karen Russell) and “a stone-cold genius” (Jenny Offill), Millet makes fiction that vividly evokes the ties between people and other animals and the crisis of extinction.Dinosaurs is the story of a man named Gil who walks from New York to Arizona to recover from a failed love. After he arrives, new neighbors move into the glass-walled house next door and his life begins to mesh with theirs. In this warmly textured, drily funny, and philosophical account of Gil’s unexpected devotion to the family, Millet explores the uncanny territory where the self ends and community begins—what one person can do in a world beset by emergencies. In the shadow of existential threat, where does hope live?

Lydia Millet is the author of A Children's Bible, a finalist for the National Book Award and a New York Times Top 10 book of 2020, among other works of fiction. She has won awards from PEN Center USA and the American Academy of Arts and Letters and been shortlisted for the National Book Award, National Book Critics Circle Award, and Los Angeles Times Book Prize. Her story collection Love in Infant Monkeys was a Pulitzer Prize finalist. She lives in Tucson, Arizona.