Home » Dinosaurs Are Not Extinct 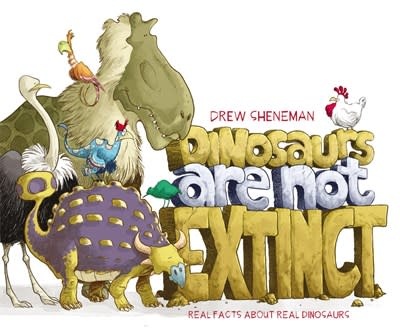 Dinosaurs Are Not Extinct

Discover the world of modern-day dinosaurs in this informative and hilarious nonfiction picture book that will show kids a new angle on a favorite subject, by award-winning author-illustrator Drew Sheneman.

A long, long time ago, the planet Earth was full of dinosaurs. Until a big, hot, moving-very-fast asteroid appeared in the sky. When it hit, most of the plants and animals on Earth went extinct. It was the end of the dinosaurs. . . or was it?Actually, the latest research shows that not all dinosaurs went extinct. Today, their descendants live on every continent and in every environment on Earth. You’ve probably seen dinosaurs at the park, eaten dinosaurs for dinner, and maybe even cleaned dinosaur poop off your family’s car.This informative, hilarious, and 100 percent factual nonfiction picture book will tell kids the little-known story of how dinosaurs evolved into today’s birds—and that dinosaurs, actually, are all around us! Full of brightly-colored, humorous, and scientifically accurate drawings, this book will delight dinosaur lovers of all ages.

Award-winning author and illustrator Drew Sheneman has been drawing professionally since 1998. Drew graduated from Central Michigan University with a BFA in illustration and cartooning internships at The Detroit News and Oakland Press under his belt. From there he went to work as an editorial cartoonist for The Star-Ledger, New Jersey’s largest newspaper, where he stayed until 2010. Drew continues to draw cartoons for the Star-Ledger on a weekly basis. In addition to his editorial cartooning Drew has done commercial illustration for clients like Hasbro and Dungeons and Dragons. He likes penguins, video games and occasionally wearing a cape around the house for fun. Drew currently resides in New Jersey with his wife and daughter.