Home » Directed by James Burrows: Five Decades of Stories from the Legendary Director of Taxi, Cheers, Frasier, Friends, Will & Grace, and More 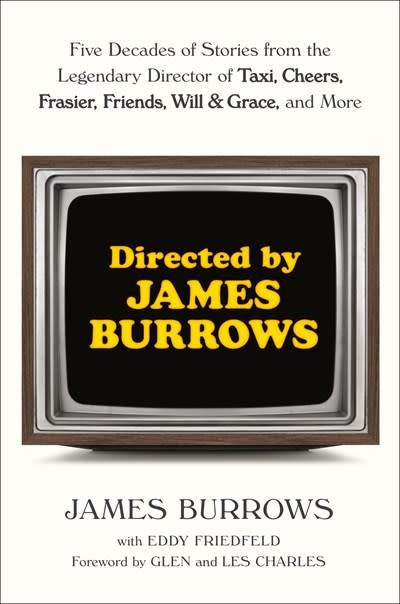 Directed by James Burrows: Five Decades of Stories from the Legendary Director of Taxi, Cheers, Frasier, Friends, Will & Grace, and More

From the director of The Mary Tyler Moore Show, Taxi, Cheers, Frasier, Friends, and Will & Grace comes an insightful and nostalgic memoir that offers a bounty of behind-the-scenes moments from our favorite shows, peeling away the layers behind how a successful sitcom comes together—and stays that way.

In Directed by James Burrows, the legendary talent not only provides backstories into the genesis and casting of the dozens of great sitcoms he directed, Burrows also offers insight into how these memorable shows are created, how they get on the air, and how the cast and crew continue to develop and grow each season, all coupled with tales of his challenges, career victories, and defeats, as well as advice for those who aspire to direct. All this from the man who helped launch the careers of Ted Danson, Kelsey Grammer, Woody Harrelson, Jennifer Aniston, Debra Messing, and Melissa McCarthy.

Readers will discover the childhood and young adult influences and experiences that inspired Burrows, including, first and foremost, his father, legendary playwright and Broadway director Abe Burrows. Directed by James Burrows explores Burrows’s journey in theater and television, including his first gigs in “the family business” in the late 1960s, his start working on Broadway and regional theater, directing, stage managing, and building sets. Hoping that his theatrical experience could be transferable to TV directing, he applied for a job with The Mary Tyler Moore Show. From there, he became a sought-after television director. His major break came with Taxi, for which he directed more than half of the series. Forming a partnership with writers/producers Glen and Les Charles, he then co-created the mega-hit Cheers, directing most of its episodes. Burrows went on to direct the pilots and multiple episodes of Frasier, Friends, Mike & Molly, The Big Bang Theory, and Two and a Half Men, plus all 246 episodes of Will & Grace and episodes of more than a hundred other shows.

A heart-and-soul master class in sitcom, Directed by James Burrows reveals what it truly takes to get a laugh.

James Burrows has directed more than one thousand episodes of sitcom television and has earned eleven Emmy Awards and five Director Guild of America Awards. His five-decade career began in theater, stage managing on Broadway and directing regional theater. In 1974, he began his television career directing episodes of The Mary Tyler Moore Show, The Bob Newhart Show, and Laverne & Shirley. He became the resident director on Taxi, then co-created the beloved classic Cheers, directing 225 of the 270 episodes. He has directed the pilots and multiple episodes of Frasier, Friends, Will & Grace, Mike & Molly, the pilots of Two and a Half Men and The Big Bang Theory, and hundreds of other shows, where he has nurtured and mentored some of television’s biggest stars.