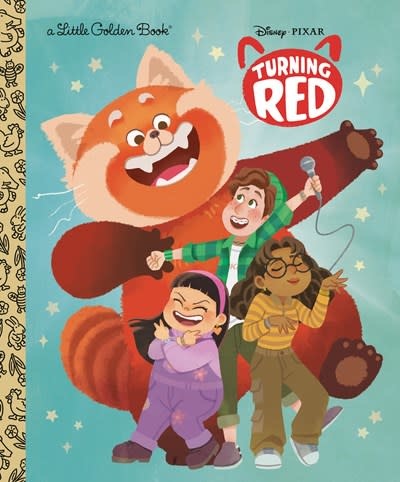 This Little Golden Book is based on Disney and Pixar’s Turning Red—in theaters spring 2022!

In Turning Red, Mei Lee is a confident, dorky thirteen-year-old torn between staying her mother’s dutiful daughter and the chaos of adolescence. And as if changes to her interests, relationships, and body weren’t enough, whenever she gets too excited (which for a teenager is practically ALWAYS), she “poofs” into a giant red panda! Turning Red is directed by Academy Award-winner Domee Shi (Pixar short Bao), produced by Lindsey Collins and coming to theaters in Spring, 2022. This Little Golden Book retelling of the animated feature film is perfect for girls and boys ages 2 to 5, as well as Disney Little Golden Book collectors of all ages!

Series Overview: Disney’s spring 2022 Animated Feature Film is Turning Red. We will be publishing Hardcover and Digest Junior Novelizations, two Step into Readings, an 8x8, and a Little Golden Book based on the film.