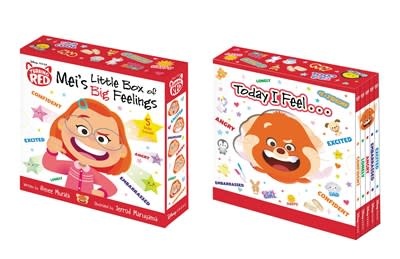 Catalog Copy: Inspired by Disney and Pixar's film Turning Red, this box set of five fun storybooks highlights some of the big feelings and emotions that come with growing up.

Meilin Lee has a lot of feelings. Sometimes she's excited and confident. Other times, she's embarrassed, angry, or even lonely. Whether these feelings are big or small, Mei reminds us that feelings are complicated, relatable, and totally normal!

With five storybooks and adorable art throughout, this special collection is sure to become a favorite among kids and fans alike!

Jerrod Maruyama is a freelance illustrator who specializes in cute character designs and concepts. Born and raised in Northern California, he earned a degree in illustration from San Jose State University. His career began in the children's educational software field before going full-time freelance and developing his own personal body of work. He has collaborated with some of the biggest brands in the entertainment industry to bring his unique approach to many beloved properties. Jerrod currently resides in Southern California—just down the road from Disneyland.