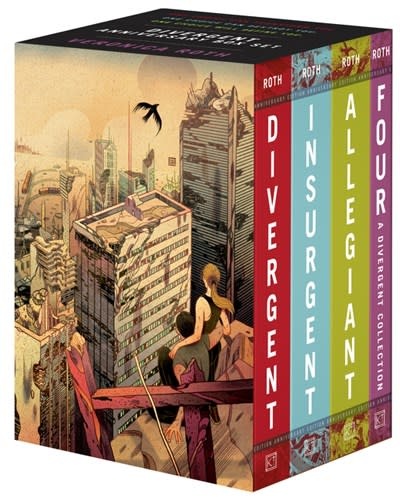 Celebrate the tenth anniversary of the publication of Divergent with a special edition four-book boxed set of the #1 New York Times bestselling series that captured the hearts of millions of readers and inspired a series of major motion pictures starring Shailene Woodley. Each book in the set includes exclusive content from Veronica Roth and beautiful reimagined cover art from award-winning illustrator Victo Ngai.

Beatrice Prior's society is divided into five factions—Candor (the honest), Abnegation (the selfless), Dauntless (the brave), Amity (the peaceful), and Erudite (the intelligent). Beatrice must choose between staying with her Abnegation family and transferring factions. Her choice could transform her. Her choice could destroy her. Her choice will define her.Containing anniversary editions of Divergent, Insurgent, Allegiant, and Four, all featuring gorgeous panoramic cover art by Victo Ngai and extra content from Veronica Roth.EXCLUSIVE EXTRASThe Histories of the Factions: Dauntless, Amity, Abnegation, Candor, and EruditeWhat's in a Name? EssayDeleted Scenes: Tris and Tobias Break Up; The Roots of Amity; Marking the Divergent; Tris's Erudite HallucinationIn-depth Q&A with Veronica Roth about the characters of Caleb, Johanna, the Amity faction, and The FactionlessFree Four: Tobias Tells the Divergent StoryWe Can Be Mended