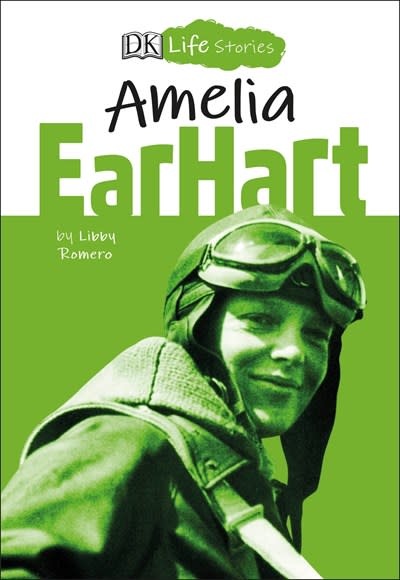 Discover the inspiring story of Amelia Earhart - the first woman to fly solo over the Atlantic Ocean - in this fascinating kids’ biography.

Amelia Earhart is one of the world’s most famous aviators in the history of flight and a role model for women everywhere. Follow the story of this trailblazing pilot - from her childhood adventures in Kansas, USA, to her around-the-world-flight in 1937, which ended in her mysterious disappearance over the Pacific Ocean.

This biography book for kids ages 8-11 charts the major events of Amelia’s life, including buying her first plane (a bright yellow bi-plane that she named “The Canary”), gaining her pilot’s licence in 1923, becoming the first female air passenger to cross the Atlantic Ocean in 1928, and becoming the first woman to fly solo across the Atlantic in 1932, earning her the nickname “Queen of the Air”.

Amelia went on to become a global celebrity. She wrote best-selling books based on her flying adventures, broke many other aviation records, championed equal rights between men and women, and helped found the Ninety-Nines, an organization for female aviators. The story of a true feminist icon, DK Life Stories: Amelia Earhart is the gripping tale of a determined woman who broke the rules and followed her dreams skywards.

This new kids’ biography series from DK goes beyond the basic facts to tell the true life stories of history’s most interesting and inspiring people. Full-color photographs and hand-drawn illustrations complement age-appropriate, narrative text to create an engaging book children will enjoy reading. Definition boxes, information sidebars, inspiring quotes, and other nonfiction text features add depth, and a handy reference section at the back makes DK Life Stories the one biography series everyone will want to collect.

Libby Romero was a journalist and a teacher before becoming an author. Her books include the biography Ibn al-Haytham: The Man Who Discovered How We See, as well as teacher guides, interactive whiteboards, and a variety of other materials, including National Geographic’s Explorer magazines and the Smithsonian Institution’s TweenTribune. Libby is the author of DK Life Stories: Helen Keller and DK Life Stories: Jane Goodall.

Charlotte Ager is the illustrator on all the Life Stories titles. Her work has appeared in The New York Times as well as in Season and Here magazines. She has also been featured on the Urban Outfitters blog. Charlotte lives in London.