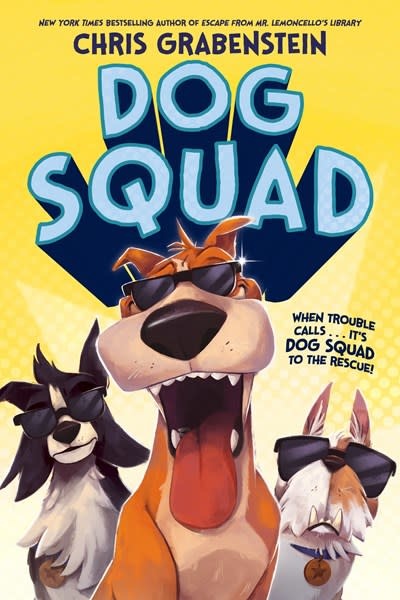 When trouble calls…it’s DOG SQUAD to the rescue!

Duke is not your average dog. Along with his crew, he fights crime and goes on claw-biting adventures helping dogs in peril in the hit streaming sensation—DOG SQUAD! Fred is a pretty average dog. He’s scrappy. He’s loveable. But he’s not brave like his heroes on Dog Squad.

Fred looks an awful lot like Duke from Dog Squad though. In fact, when Duke needs a stand-in, Fred’s the perfect choice. But the Dog Squad action doesn’t always stop on screen! When there’s danger in real life, can Fred find the courage to step up and save the day?!

Series Overview: Look for the next Dog Squad in Summer 2022!

CHRIS GRABENSTEIN is the New York Times bestselling author of the Mr. Lemoncello and the Welcome to Wonderland series, as well as the coauthor of many page-turners with James Patterson, including Katt Vs. Dogg and

the Max Einstein series, and of Shine! cowritten with Chris’s wife J.J. Grabenstein. Chris lives in New York City. Visit Chris at ChrisGrabenstein.com and on Twitter at @CGrabenstein.