Home » Dona Esmeralda, Who Ate Everything 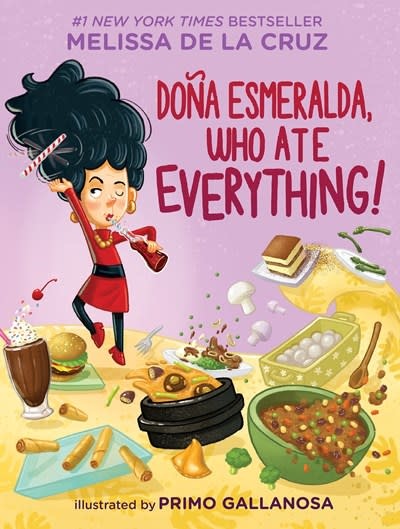 Dona Esmeralda, Who Ate Everything

A silly, laugh-out-loud read-aloud picture book debut from #1 New York Times bestselling author Melissa de la Cruz!Once upon a time, in the middle of a group of seven thousand happy islands named after King Philip of Spain, there lived a lady named Doña Esmeralda.She had a big bouffant hairdo and was much smaller than you.And she was always hungry...And so begins the wickedly hilarious tale of one very old, but very stylish little lady who loves to eat, but can only find the ooey, gooey, mushy, smelly leftovers of naughty children to nosh on. But what happens when Doña Esmeralda finds out about all the tasty treats that children do eat? Hold on to your hairdos as Esmeralda eats everything in sight in a cumulative read-aloud inspired by stories from author Melissa de la Cruz's childhood in the Philippines!

Primo Gallanosa is an author and illustrator for children's picture books. He previously worked as an artist for video games, and created and co-owns an award-winning kids app called Pocket Worlds. He has lived in Southern California all his life and attended the prestigious art school CalArts. When Primo isn't drawing, you can find him playing video games, reading a book, or surfing. He lives in Los Angeles with his amazing author wife, Marie Lu, and two adorable pups. Doña Esmeralda, Who Ate Everything is his first book with Scholastic. Find him online at primogallanosa.com.

Melissa de la Cruz is the #1 New York Times bestselling author of many critically acclaimed and award-winning novels for readers of all ages, including her most recent hits: Disney's Descendants series; the Blue Bloods series; the Witches of East End series (which was adapted into a two-season television drama on Lifetime); Alex & Eliza: A Love Story; Something in Between; and Pride and Prejudice and Mistletoe. Melissa is the co-director of YALLFest (Charleston, South Carolina) and the co-founder of YALLWest (Santa Monica, California). She grew up in Manila and she now lives in West Hollywood, California, with her husband and daughter. Learn more at melissa-delacruz.com.