Home » Don't Look for Me 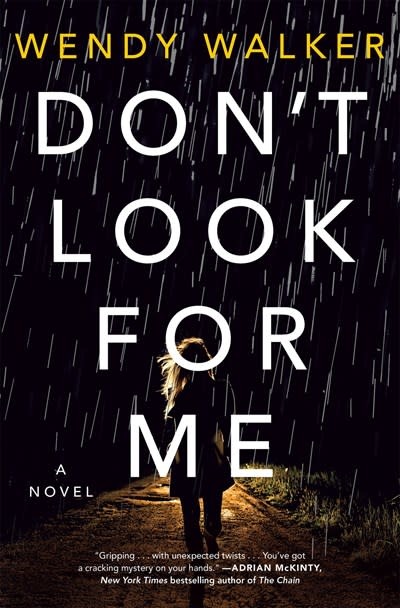 Don't Look for Me

In Wendy Walker's thrilling novel Don't Look for Me, the greatest risk isn’t running away. It’s running out of time.

One night, Molly Clarke walked away from her life. The car abandoned miles from home. The note found at a nearby hotel. The shattered family that couldn’t be put back together. It happens all the time. Women disappear, desperate to leave their lives behind and start over. She doesn’t want to be found. Or at least, that’s the story. But is that what really happened to Molly Clarke?

The night Molly disappeared began with a storm, running out of gas, and a man in a truck offering her a ride to town. With him is a little girl who reminds her of the daughter she lost years ago. It feels like a sign. And Molly is overcome with the desire to be home, with her family—no matter how broken it is. She accepts the ride. But when the doors are locked shut, Molly begins to suspect she has made a terrible mistake.

When a new lead comes in after the search has ended, Molly’s daughter, Nicole, begins to wonder. Nothing about her mother’s disappearance makes sense.

Nicole returns to the small, desolate town where her mother was last seen to find the truth. The locals are kind and eager to help. The innkeeper. The bartender. Even the police. Until secrets begin to reveal themselves and she comes closer to the truth about that night—and the danger surrounding her

WENDY WALKER has worked as an attorney specializing in family law. Her novels include The Night Before, Emma in the Night, and All is Not Forgotten. She lives in Connecticut where she is at work on her next novel.