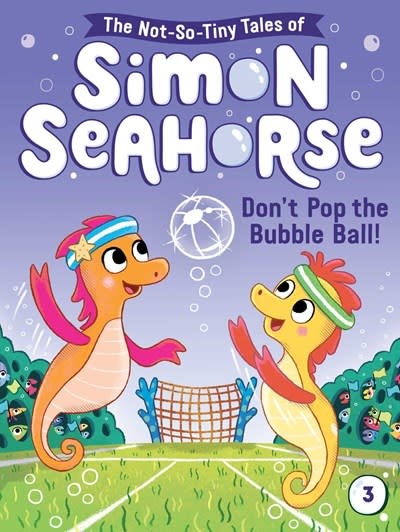 Simon tries out to be on a bubble ball team with his sister in this third book in The Not-So-Tiny Tales of Simon Seahorse chapter book series.

Bubble ball is the most popular sport in Coral Grove. And Simon’s oldest sister, Kya, is really good at it. One day, she announces that all the bubble ball teams are holding tryouts. Simon knows that whatever happens, he’s bound to get a good story out of it, so he decides to take a swing at the sport! It sounds fun, plus Kya can help him practice! So when Simon is offered a spot on a bubble ball team, both he and Kya are super excited. There’s just one problem: he’s not on Kya’s team, he’s on the opposing team. Which means…they’ll be playing against each other!

With easy-to-read language and illustrations on almost every page, The Not-So-Tiny Tales of Simon Seahorse chapter books are perfect for emerging readers.

Cora Reef has been telling tales for as long she can remember. She might not have grown up in a large family like Simon’s, but her big imagination has always kept her company. Cora lives near Boston, Massachusetts, with her family, where she is never far from the ocean.

Liam Darcy is a British illustrator who loves to be inspired by animals, nature, and human interactions. Most of his work is created digitally but he occasionally experiments with paints and ink as well. Liam lives in London and when he’s not creating art, he enjoys writing and fitness!