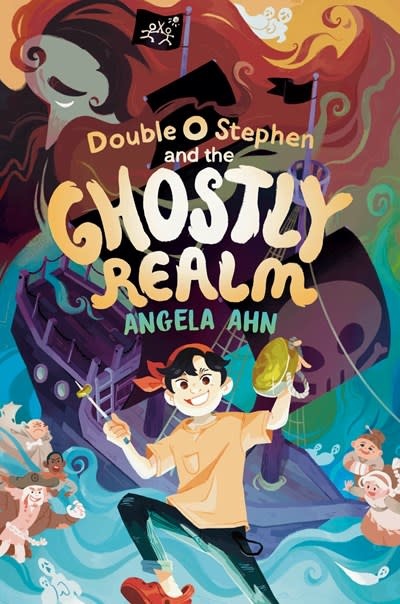 Ghosts, pirates and family secrets — Stephen gets more than he bargained for when he seeks out adventure in the ghostly realm, for fans of When You Trap a Tiger.

Stephen loves pirates. What he doesn’t love is his name: Stephen Oh-O’Driscoll. He believes when his Korean mother and Irish father gave him this name, that it was just one cruel setup for being teased. Giving things the proper name is important, which is why Stephen thinks that it’s time to update the definition of "pirate." They've got a bad rep, and maybe they deserve some of it, but Stephen still likes a few pirate traditions, like bandannas and eyepatches — he’s just not that into stealing things from people. He has the perfect new word: piventurate. A sailor who passionately seeks adventure. That's what he wants to be.

When he gets suspended from school for doing proper piventurate-in-training things (using sticks to practice sword fighting), his mother doesn’t let him sit around doing nothing, instead she takes him to a museum. At the museum everything changes. Stephen finds himself in a strange new place, face-to-face with a real pirate. A pirate ghost.

Captain Sapperton needs Stephen's help to cross to the other side, and his former ghost crew are intent on making sure Stephen follows through, whatever it takes. Stephen is about to discover the true meaning of piventurate, and much to his surprise, his adventure will not only take him farther into the ghostly realm, but also closer to home, where long-held family secrets reveal surprising ties to the spirit world.

ANGELA AHN is a former teacher and librarian. She is the author of several children's books including Krista Kim-Bap and Peter Lee's Notes from the Field. She lives in Vancouver, B.C. with her family.