Home » Down Along with That Devil's Bones 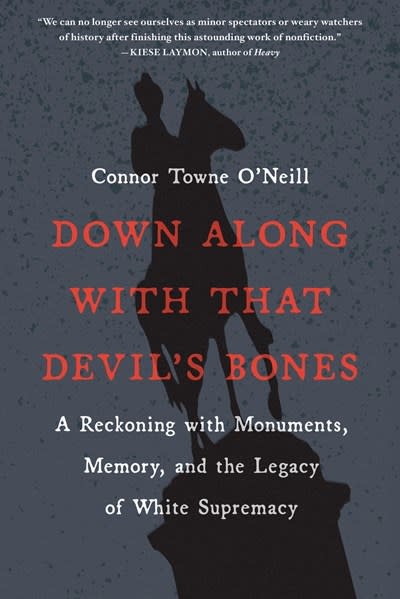 Down Along with That Devil's Bones

“We can no longer see ourselves as minor spectators or weary watchers of history a­fter finishing this astonishing work of nonfiction.” —Kiese Laymon, author of Heavy

Connor Towne O’Neill’s journey onto the battlefield of white supremacy began with a visit to Selma, Alabama, in 2015. There he had a chance encounter with a group of people preparing to erect a statue to celebrate the memory of Nathan Bedford Forrest, one of the most notorious Confederate generals, a man whom Union general William Tecumseh Sherman referred to as “that devil.” After that day in Selma, O’Neill, a white Northerner transplanted to the South, decided to dig deeply into the history of Forrest and other monuments to him throughout the South, which, like Confederate monuments across America, have become flashpoints in the fight against racism.

Forrest was not just a brutal general, O’Neill learned; he was a slave trader and the first Grand Wizard of the Ku Klux Klan. O’Neill encountered citizens who still hold Forrest in cult-like awe, desperate to preserve what they call their “heritage,” and he also talked to others fighting to tear the monuments down. In doing so he discovered a direct line from Forrest’s ugly history straight to the heart of the battles raging today all across America. The fight over Forrest reveals a larger battle, one meant to sustain white supremacy—a system that props up all white people, not just those defending the monuments. With clear-eyed passion and honest introspection, O’Neill takes readers on a journey to understand the many ways in which the Civil War, begun in 1860, has never ended.

A brilliant and provocative blend of history, reportage, and personal essay, Down Along with That Devil’s Bones presents an important and eye-opening account of how we got from Appomattox to Charlottesville, and of our vital need to confront our past in order to transcend it and move toward a more just society.

Connor Towne O'Neill's writing has appeared in New York magazine, Vulture, Slate, and elsewhere, and he works as a producer on the NPR podcast White Lies, a finalist for the 2020 Pulitzer Prize in Audio Reporting. He lives in Tuscaloosa, Alabama, and teaches at Auburn University and with the Alabama Prison Arts + Education Project. Down Along with That Devil's Bones is his first book.