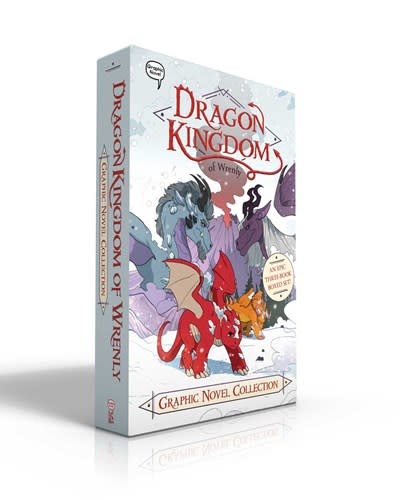 The scarlet dragon Ruskin discovers a whole new world of magic, intrigue, and adventure in these first three adventures of the chapter book graphic novel series—now available in a collectible paperback boxed set!

As the pampered pet dragon of the Prince of Wrenly, Ruskin has never known life beyond the walls of the palace. Until Cinder, a young dragon from Crestwood who has come to the palace seeking help, mistakes Ruskin for the king. When Ruskin learns from Cinder that all of Wrenly has fallen under a terrible curse, he knows there’s only one thing he can do: leave behind the safety and comfort of the palace and help save his beloved kingdom. This act of bravery sets into motion a chain of events that will forever change Ruskin’s fate and the fate of the kingdom of Wrenly.

With each new adventure that Ruskin and his new friends set out on, the stakes get higher, and the young dragons begin to realize that things are not at all what they seem.