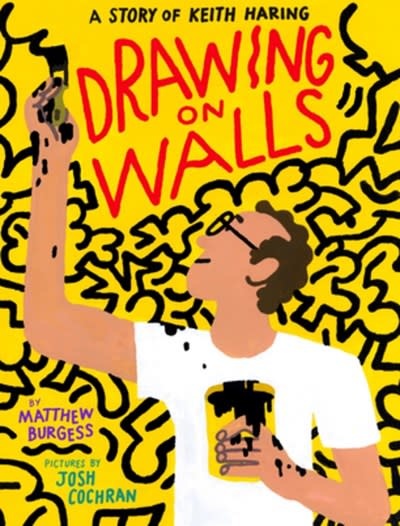 Truly devoted to the idea of public art, Haring created murals wherever he went.

"Burgess describes Haring discovering Robert Henri’s The Art Spirit in college (“He felt as if the book was speaking directly to him”), encountering the large paintings of Pierre Alechinsky (he was “blown away”), and recognizing a common impulse in dancers at the West Village’s Paradise Garage (“For Keith, drawing and painting were like dancing. He called it ‘mind-to-hand flow’”). Cochran uses a thick black line to suggest Haring’s creations, and renders figures in a Haring-esque style without seeming gimmicky. Of interest to young readers are Haring’s frequent efforts to involve children in mural-making projects. The story, including a respectful acknowledgement of Haring’s death from AIDS, makes the subject seem immediate and real—and presents a compelling vision of answering the call to create." —Starred Review, Publishers WeeklyI would love to be a teacher because I love children and I think that not enough people respect children or understand how important they are. I have done many projects with children of all ages. —Keith HaringTruly devoted to the idea of public art, Haring created murals wherever he went.From Matthew Burgess, the much-acclaimed author of Enormous Smallness, comes Drawing on Walls: A Story of Keith Haring. Often seen drawing in white chalk on the matte black paper of unused advertising space in the subway, Haring’s iconic pop art and graffiti-like style transformed the New York City underground in the 1980s. A member of the LGBTQ community, Haring died tragically at the age of thirty-one from AIDS-related complications. Illustrated in paint by Josh Cochran, himself a specialist in bright, dense, conceptual drawings, this honest, celebratory book honors Haring’s life and art, along with his very special connection with kids.

Matthew Burgess is an Assistant Professor of English at Brooklyn College. He is the author of Slippers for Elsewhere, a poetry collection, and Enormous Smallness: A Story of E. E. Cummings, his first children’s book with Enchanted Lion Books. Matthew edited an anthology of writing and visual art titled Dream Closet: Meditations on Childhood Space, and currently he is editing a collection of imaginative writing prompts for a forthcoming book with Teachers & Writers Collaborative. Matthew has been teaching poetry in New York City elementary schools since 2001.Josh Cochran grew up in Taiwan and California. Based in Brooklyn, NY, he works as an artist and illustrator, often painting murals. In 2013, his work on Ben Kweller’s Go Fly A Kite received a Grammy nomination for Best Limited Edition Packaging. He has a number of side projects, and sometimes exhibits his work in galleries. This marks his picture book debut.