Home » Dreams of El Dorado: A History of the American West 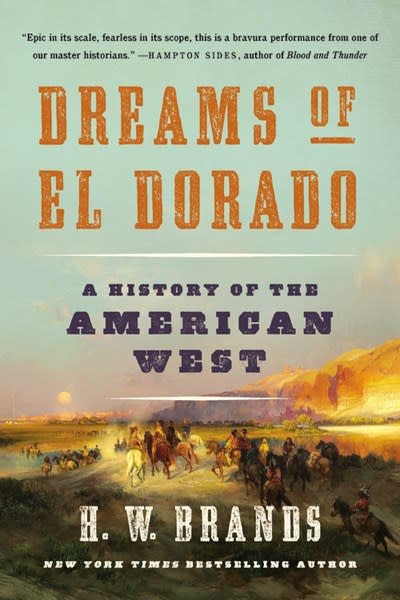 Dreams of El Dorado: A History of the American West

"Epic in its scale, fearless in its scope" (Hampton Sides), this masterfully told account of the American West from a two-time Pulitzer Prize finalist sets a new standard as it sweeps from the California Gold Rush and beyond.

In Dreams of El Dorado, H. W. Brands tells the thrilling, panoramic story of the settling of the American West. He takes us from John Jacob Astor's fur trading outpost in Oregon to the Texas Revolution, from the California gold rush to the Oklahoma land rush. He shows how the migrants' dreams drove them to feats of courage and perseverance that put their stay-at-home cousins to shame-and how those same dreams also drove them to outrageous acts of violence against indigenous peoples and one another. The West was where riches would reward the miner's persistence, the cattleman's courage, the railroad man's enterprise; but El Dorado was at least as elusive in the West as it ever was in the East.

Balanced, authoritative, and masterfully told, Dreams of El Dorado sets a new standard for histories of the American West.

H. W. Brands holds the Jack S. Blanton Sr. chair in history at the University of Texas at Austin. A New York Times-bestselling author, he was a finalist for the Pulitzer Prize in biography for The First American and Traitor to His Class. He lives in Austin, Texas.