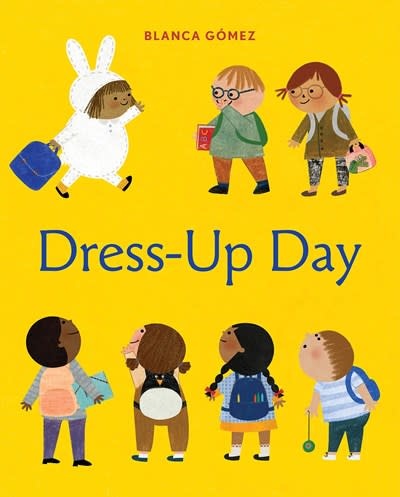 After missing her class costume party, a girl decides she doesn’t need an excuse to dress up in this charming, relatable school storyWhen a little girl is home sick for dress-up day at school, she decides there’s no need to miss out entirely: She’ll just wear her rabbit costume the next day!

But when the next day arrives and she’s the only one in costume, it doesn’t feel like such a great idea, after all. Can a little bit of confidence and an unexpected new friend turn a self-conscious moment into a wonderful one?

Funny, endearing, and relatable to any kid who’s ever felt insecure, Dress-Up Day is an ode to friendship, embracing individuality, and putting yourself out there no matter the occasion.

Blanca Gómez is a much sought-after picture book illustrator and the author-artist of Bird House. In a starred review, Kirkus called One Family “visually striking,” and the New York Times called her illustrations “adorable.” “Wonder-filled and delightful” were the words Kirkus used to describe City Moon in another starred review. Blanca lives in Madrid, Spain.