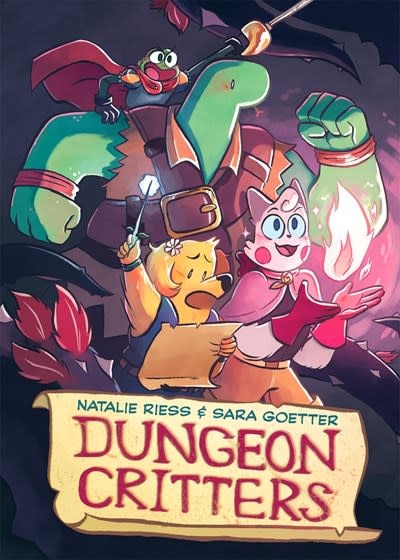 A middle-grade graphic novel about a gang of adorable animal friends on a D&D style dungeon crawl.

Join a tight-knit squad of animal companions on a wild adventure investigating a sinister botanical conspiracy among the furry nobility. Motivated by rivalries, a strong moral compass, and a lust for adventure, the critters navigate not only perils and dangers of the natural world, but also perils and dangers . . . of the heart! Their journey takes them through haunted dungeons, swamps, and high society balls, and brings them closer together as friends.

Natalie Riess is a cartoonist from Pennsylvania. She now lives in Austin, TX, where she makes comics with her girlfriend and gets yelled at by their beautiful cat. She loves to draw food, nature, and horrible plant monsters. Her previous titles include Space Battle Lunchtime and Snarlbear.

Sara Goetter is a Pennsylvania-born, currently Austin based cartoonist, where she draws comics with her girlfriend. She specializes in drawing goofy faces and dumb jokes, and cries whenever she thinks about frogs too much.