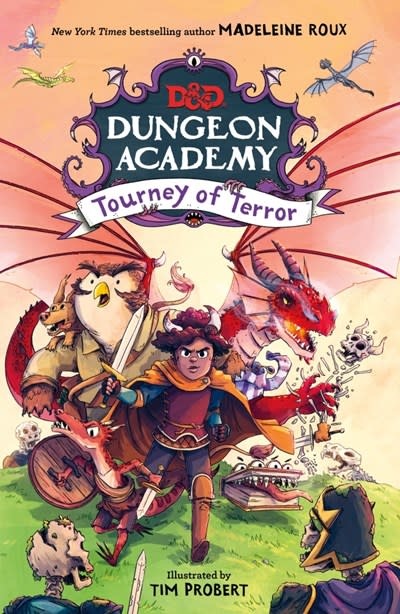 This 208-page exclusive middle grade novel continues the adventures of Zelli and the Danger Club as they uncover the truth of an ever-growing force that has now come to the halls of Dungeon Academy!

In the second installment of the D&D middle grade series, something has come knocking on the gates of Dungeon Academy! When the rival school, the Waterdeep Dragons, come to Dungeon Academy to participate in the annual Academy Clash Games, everyone is on high alert. The Waterdeep Dragons are the best of the best, the elite of their realm, and undefeated in all the games. But our hero, Zelli Stormclash is no stranger to impossible odds. Just a few months ago, Zelli and her Danger Club crew came face-to-face with a necromancer and his army of undead, defeating him and saving her fellow classmates from potential doom. Certainly tackling a dozen overly athletic and near-perfect specimens capable of flying and spewing fire who are bent on crushing her schoolmates on their home turf should be easy . . . right? But the Waterdeep Dragons have one more advantage over the Flumphs: Tavian Truescale, the greatest player to ever grace the Goreball Field. When Zelli meets Tavian, she immediately notices something very familiar about him. If this wasn’t enough to “raise scales,” something is lurking in the halls of Dungeon Academy, and only Zelli seems to notice. When she brings it to the dean’s attention, they dismiss her concerns, instructing her to stop poking her nose into matters that do not concern her. But this does concern her, and Zelli uncovers something that should concern everyone at Dungeon Academy, Waterdeep, and everywhere else in the Forgotten Realms.

DIANE WALKER is the New York Times bestselling author of the Asylum series, as well as many titles for children, teenagers, and adults, including contributions to Star Wars and World of Warcraft. A veteran Dungeons & Dragons player and DM, Madeleine was raised in Minnesota, attended Beloit College in Wisconsin, and now lives with her two beloved blink dogs in Seattle, WA.TIM PROBERT is the illustrator of several middle grade books, including Pickle and the Rip & Red series, as well as his own graphic novel, Lightfall, for HarperAlley. Tim is also an art director at the animation studio Nathan Love. He lives in New York with his wife and two cats.