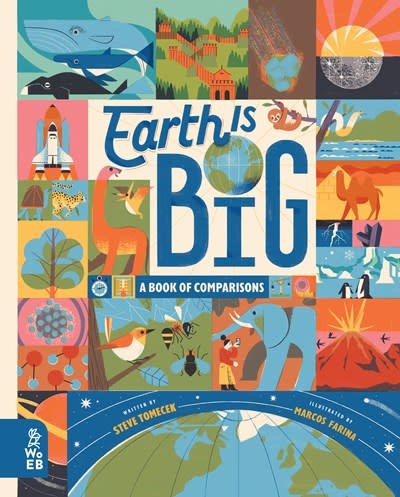 Find out how unique Planet Earth really is in this eye-catching book of comparisons.Earth is big! (compared to a frog)Earth is small! (when it’s hiding in a galaxy)And that's not all. Earth is wet and dry, hot and cold, round and jagged, fast and slow. You get the idea. It depends how you look at it!Get to know our planet in a whole new way by comparing it to a huge variety of other incredible things—from tiny particles to giant star clusters. Did you know soap bubbles are some of the roundest objects in the universe? Or that we humans are totally outnumbered by chickens? Or that the driest desert on Earth isn’t scorching but freezing? Tour some of the most extreme places on the planet and beyond it, take a look at life forms from bacteria to elephants to redwood trees, and explore what makes our planet the perfect home for us.You’ll never see Earth the same way again!

Stephen M. Tomecek began his professional career as a geologist (yes, he's a real scientist!). He served as the Associate Director for the Science Museum of Long Island and as the Science Program Supervisor for the New York Hall of Science. He has written and has helped to develop web sites for Discovery Communications, the Johns Hopkins School of Public Health, and Los Alamos Labs. Steve has written over 45 nonfiction books for both teachers and kids. He lives in New York City.Marcos Farina is an Argentine graphic designer & illustrator. He is professor at the Faculty of Architecture, Design and Urbanism of the Buenos Aires University, where he has taught since 2005.

Publisher: What on Earth Books