Home » Edie in Between 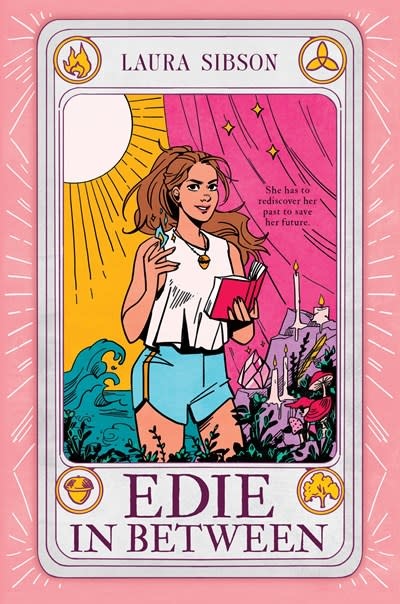 A modern-day Practical Magic about love, loss, and embracing the mystical.

It’s been one year since Edie’s mother died. But her ghost has never left.

According to her GG, it’s tradition that the dead of the Mitchell family linger with the living. It’s just as much a part of a Mitchell’s life as brewing healing remedies or talking to plants. But Edie, whose pain over losing her mother is still fresh, has no interest in her family’s legacy as local “witches.”

When her mother’s teenage journal tumbles into her life, her family’s mystical inheritance becomes once and for all too hard to ignore. It takes Edie on a scavenger hunt to find objects that once belonged to her mother, each one imbued with a different memory. Every time she touches one of these talismans, it whisks her to another entry inside the journal—where she watches her teenage mom mourn, love, and hope just as Edie herself is now doing.

But as Edie discovers, there’s a dark secret behind her family’s practice that she’s unwittingly released. She’ll have to embrace—and master—the magic she’s always rejected…before it consumes her.

Tinged with a sweet romance with the spellbinding Rhia, who works at the local occult shop, Edie in Between delivers all the cozy magic a budding young witch finding her way in the world needs.

Laura Sibson worked for years as a career counselor for undergraduates before getting her MFA from the Vermont College of Fine Arts. When she’s not writing, counseling, or drinking impossibly strong coffee, you can find her running miles around her home in Philadelphia, walking her dog, or ingesting pop culture (along with great takeout) with her family.