Home » Edie Richter is Not Alone: A novel 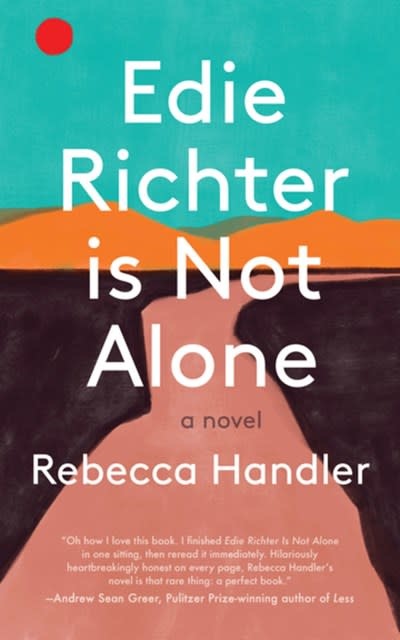 Edie Richter is Not Alone: A novel

A peek inside one woman's inner world, as dark as it is hilarious, as she moves with her husband to Australia

“Oh how I love this book. I finished Edie Richter Is Not Alone in one sitting, then reread it immediately. Hilariously heartbreakingly honest on every page, Rebecca Handler’s novel is that rare thing: a perfect book." —Andrew Sean Greer, Pulitzer Prize-winning author of Less

Funny, acerbic Edie Richter is moving with her husband from San Francisco to Perth, Australia. She leaves behind a sister and mother still mourning the recent death of her father. Before the move, Edie and her husband were content, if socially awkward―given her disinclination for small talk.

In Perth, Edie finds herself in a remarkably isolated yet verdant corner of the world, but Edie has a secret: she committed an unthinkable act that she can barely admit to herself. In some ways, the landscape mirrors her own complicated inner life, and rather than escaping her past, Edie is increasingly forced to confront what she's done. Everybody, from the wildlife to her new neighbors, is keen to engage, and Edie does her best to start fresh. But her relationship with her husband is fraying, and the beautiful memories of her father are heartbreaking, and impossible to stop. Something, in the end, has to give.

Written in clean spare prose that is nevertheless brimming with the richness and wry humor of the protagonist's observations and idiosyncrasies, Edie Richter is Not Alone is Rebecca Handler’s debut novel. It is both deeply shocking and entirely quotidian: a story about a woman's visceral confrontation with the fundamental meaning of humanity.

Rebecca Handler is a writer who lives and works in San Francisco. Rebecca's stories have been published and awarded in several anthologies. Edie Richter is Not Alone is her debut novel. See more at www.onewomanparty.com.