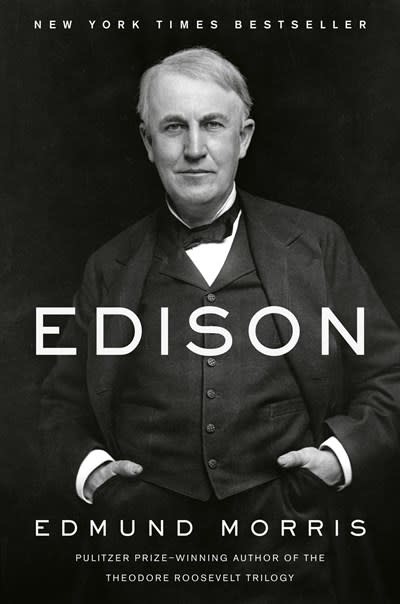 Edison was arguably the most famous man in the world when he died in 1931, so revered for his perfection of the incandescent light bulb that President Hoover proposed darkening the entire United States for one minute on the night of his funeral. For the rest of the twenieth century, Edison’s image—polished by his additional fame as the inventor of the phonograph, the Kinetoscope moving-picture camera, and the rechargable alkaline battery—solidified into marble, cold to the touch and impossible to penetrate. The man who once was jovial flesh, overwhelmingly charismatic despite the handicap of deafness, the lover of two wives and father of six children, the mogul who built up no fewer than 120 companies, the creator of the world’s first research and development park, is now little understood, even though his name is still one of the most cited in the history of science and technology.

Edmund Morris has spent seven years exploring the prodigious, five-million-page archive of papers preserved under a bombproof concrete shell at the inventor’s laboratory in West Orange, New Jersey—an archive supplemented by thousands of audio and film records and artifacts. In the process he has not only resurrected Edison, literarily speaking, as a human being, but as a polymath of staggering variety - Edison the botanist, the naval strategist, the iron miner, the chemist and telegrapher and audio producer and publisher. From age twelve onward, Edison was an open floodgate of what he modestly called “new things,” inventing the electric pen, the carbon telephone transmitter, the X-ray fluoroscope, the world’s first film studio, earbuds, “talkie” movies, voice-activated motors, audio mail, the miner’s safety lamp, a night telescope, tornado-proof houses, quadruplex telegraphy, and countless other innovations.

This extraordinary new biography is a full portrait of a towering figure in American history, written by one of our most accomplished and respected biographers.

Edmund Morris (May 27, 1940 - May 24, 2019) was born and educated in Kenya and went to college in South Africa. He worked as an advertising copywriter in London before immigrating to the United States in 1968. His biography The Rise of Theodore Roosevelt won the Pulitzer Prize and American Book Award in 1980. Theodore Rex followed in 2001, and Colonel Roosevelt in 2010, so completing his three-volume life of Theodore Roosevelt. Morris was President Reagan’s authorized biographer and wrote the national bestseller Dutch: A Memoir of Ronald Reagan in 1999. He is also the author of Beethoven: The Universal Composer (2005), and This Living Hand (2012), a collection of essays. He lived in New York and Connecticut with his wife and fellow biographer Sylvia Jukes Morris.