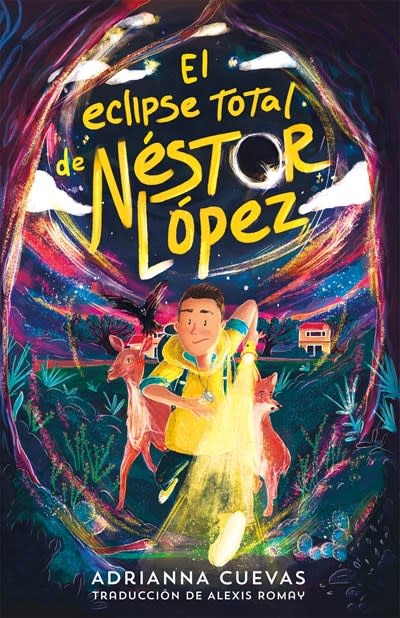 In this magical middle grade debut novel, a Cuban American boy must use his secret ability to communicate with animals to save the inhabitants of his town, now translated to Spanish by Alexis Romay.

All twelve-year-old Nestor Lopez wants is to live in one place for more than a few months and have dinner with his dad, an Army sergeant deployed in Afghanistan. When he and his mother move to a new town to live with his grandmother, Nestor plans to lay low, and he certainly has no intention of letting anyone find out his deepest secret—that he can talk to animals. But when the animals in town start disappearing, and Nestor's grandmother is spotted in the woods where they were last seen, suspicion mounts against her. Nestor learns that they are being taken by a tule vieja, a witch who bites animals to gain their power, and his extraordinary ability is put front and center as he tries to catch the real culprit and clear his grandmother's name.

Adrianna Cuevas is a first-generation Cuban American originally from Miami, Florida and the author of Cuba in My Pocket and The Total Eclipse of Nestor Lopez, a Pure Belpré Honor Book. After teaching Spanish and ESOL for sixteen years, she decided to pursue her passion for storytelling. Adrianna currently resides outside of Austin, Texas with her husband and son where they enjoy hiking, traveling, and cooking lots of Cuban food. adriannacuevas.com

Alexis Romay is the author of two novels, a book of sonnets and a book of décimas. He has translated into Spanish over forty picture books, as well as novels by Ana Veciana-Suarez, Margarita Engle, Stuart Gibbs, Meg Medina, and Adrianna Cuevas, and into English a novel by Miguel Correa Mujica. He has written lyrics for songs by Paquito D’Rivera. He lives in New Jersey with his wife, his son, and his dog. linktr.ee/aromay