Home » Eleanor Makes Her Mark: How Eleanor Roosevelt Reached Out, Spoke Up, & Changed the World 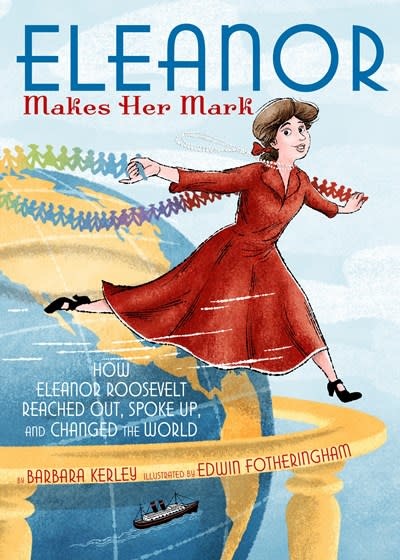 Eleanor Makes Her Mark: How Eleanor Roosevelt Reached Out, Spoke Up, & Changed the World

All her life, Eleanor Roosevelt hoped to "leave some mark upon the world."

She was a shy child who found joy in helping others.

A passionate young adult who longed for adventure.

An independent young woman who formed her own opinions.

A trustworthy partner who worked tirelessly for change.

So when her husband became president and she became first lady, Eleanor was ready to make her mark. With characteristic candor, compassion, and courage, she traversed the country and trotted the globe, championing the value and dignity of every human being and transforming the role of first lady. This graceful portrait of a vivacious American icon radiates the essence of Eleanor, a model for kindness and purpose, in her time and in ours.

How will you leave your mark upon the world?

Barbara Kerley is a two-time Sibert Honoree and a Boston Globe-Horn Book Honoree whose award-winning biographies include What to Do About Alice?, The Extraordinary Mark Twain (According to Susy), Those Rebels, John & Tom, and A Home for Mr. Emerson, all illustrated by Edwin Fotheringham; Tigers & Tea with Toppy, illustrated by Matte Stephens; and The Dinosaurs of Waterhouse Hawkins and Walt Whitman: Words for America, illustrated by Brian Selznick. Kerley's books have all been praised for their lively prose, meticulous research, and artistic presentation style. She lives in Portland, Oregon. Visit her online at barbarakerley.com.

Edwin Fotheringham’s stylish, award-winning illustrations have graced the pages of The New Yorker, The Wall Street Journal, The New York Times, and many other publications. He has illustrated numerous highly acclaimed nonfiction picture books, such as Barbara Kerley's What to Do About Alice?, a Sibert Honor Book and a Boston Globe-Horn Book Award Honor Book; The Extraordinary Mark Twain (According to Susy), a New York Public Library Best Children's Book; Those Rebels, John & Tom, an NCTE Orbis Pictus Award Honor Book; and A Home for Mr. Emerson, a NAPPA Gold Award winner; as well as younger fiction picture books, such as Pam Muñoz Ryan's Tony Baloney and the eponymous beginning reader series, Jennifer Hamburg's Monkey and Duck Quack Up!, a spring 2015 Indie Favorite, and Andria Rosenbaum’s Big Sister, Little Monster. Ed lives in Seattle, Washington. Visit him online at edfotheringham.com.