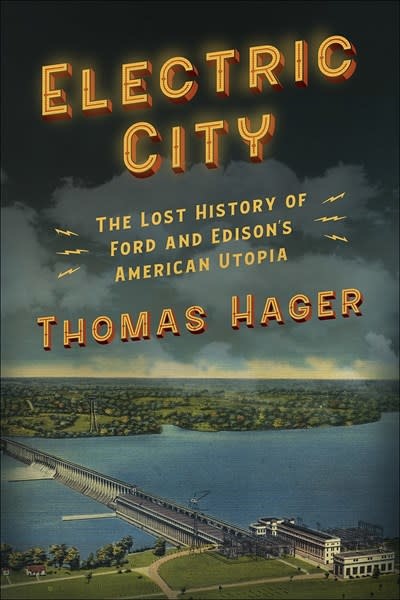 The extraordinary, unknown story of two giants of American history—Henry Ford and Thomas Edison—and their attempt to create an electric-powered city of tomorrow on the Tennessee River

During the roaring twenties, two of the most revered and influential men in American business proposed to transform one of the country’s poorest regions into a dream technological metropolis, a shining paradise of small farms, giant factories, and sparkling laboratories. Henry Ford and Thomas Edison’s “Detroit of the South” would be ten times the size of Manhattan, powered by renewable energy, and free of air pollution. And it would reshape American society, introducing mass commuting by car, use a new kind of currency called “energy dollars,” and have the added benefit (from Ford and Edison's view) of crippling the growth of socialism.

The whole audacious scheme almost came off, with Southerners rallying to support what became known as the Ford Plan. But while some saw it as a way to conjure the future and reinvent the South, others saw it as one of the biggest land swindles of all time. They were all true.

Electric City is a rich chronicle of the time and the social backdrop, and offers a fresh look at the lives of the two men who almost saw the project to fruition, the forces that came to oppose them, and what rose in its stead: a new kind of public corporation called the Tennessee Valley Authority, one of the greatest achievements of the New Deal. This is a history for a wide audience, including readers interested in American history, technology, politics, and the future.

Thomas Hager is an award-winning author of books on the history of science and medicine, including The Alchemy of Air and Ten Drugs: How Plants, Powders and Pills Have Shaped the History of Medicine. He is a courtesy associate professor of journalism and communication at the University of Oregon.