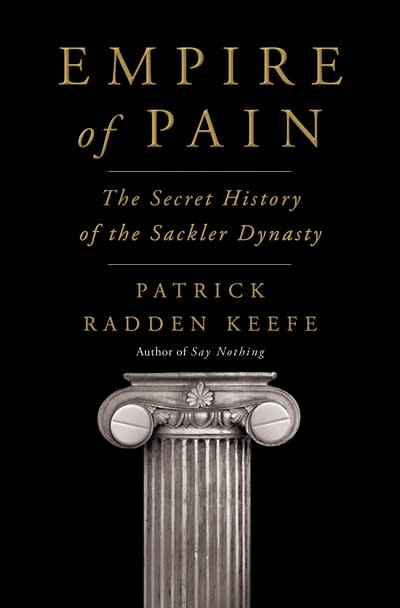 The highly anticipated portrait of three generations of the Sackler family, by the prize-winning, bestselling author of SAY NOTHING

The Sackler name adorns the walls of many storied institutions: Harvard, the Metropolitan Museum of Art, Oxford, the Louvre. They are one of the richest families in the world, known for their lavish donations to the arts and sciences. The source of the family fortune was vague, however, until it emerged that the Sacklers were responsible for making and marketing Oxycontin, a blockbuster painkiller that was a catalyst for the opioid crisis.

Empire of Pain is a masterpiece of narrative reporting and writing, exhaustively documented and ferociously compelling.

PATRICK RADDEN KEEFE is a staff writer at The New Yorker and the author, most recently, of the New York Times bestseller Say Nothing: A True Story of Murder and Memory in Northern Ireland, which received the National Book Critics Circle Award for Nonfiction, was selected as one of the ten best books of 2019 by the New York Times Book Review, The Washington Post, Chicago Tribune and The Wall Street Journal, and was named one of the top ten nonfiction books of the decade by Entertainment Weekly. His previous books are The Snakehead and Chatter. His work has been recognized with a Guggenheim Fellowship, the National Magazine Award for Feature Writing, and the Orwell Prize for Political Writing. He is also the creator and host of the eight-part podcast Wind of Change.