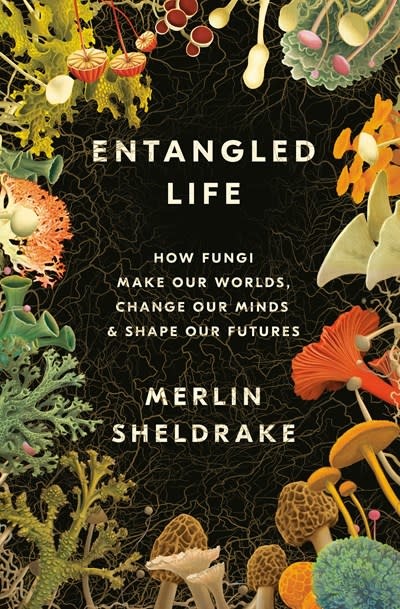 Entangled Life: How Fungi Make Our Worlds, Change Our Minds & Shape Our Futures

A mind-altering look at the secret life of fungi and the extraordinary way they shape our world from a lively young Cambridge scientist.

Fungi are neither plant nor animal, but they are vital to nearly all living systems. Merlin Shelldrake is one of a handful of scientists who specialize in the behavior of this massively diverse kingdom of life. His mind-bending introduction to this world will show us that humanity is just a small piece of a much larger puzzle.

Perched at the border between life and non-life, fungi use diverse cocktails of potent enzymes and acids to disassemble some of the most stubborn substances on the planet, turning rock into soil and wood into compost so plants can grow. Fungus not only creates the soil, it sends out networks of tubes that enmesh the soil and the things growing within it in the “Wood Wide Web.” Fungi also drive many long-standing human fascinations: yeasts that cause bread to rise and orchestrate the fermentation of sugar into alcohol; the coveted perfume agarwood, which derives from a fungal infection; psychedelic fungi; and the mold that produces penicillin and revolutionized medicine.

In The Entangled Life, Merlin Sheldrake brings to light science’s latest discoveries and ingeniously parses the varieties and behaviors of the fungi themselves, all while keeping us tuned to the fundamental questions fungi raise about the nature of intelligence and identity.

Merlin Sheldrake has a PhD in the History and Philosophy of Science at Cambridge University, where he was a prize-winning scholar. He was among the top 100 Global Thought Leaders for 2013, as ranked by the Duttwieller Institute, Zurich, Switzerland’s leading think tank.He is also an experienced musician and performer. This is his first book.