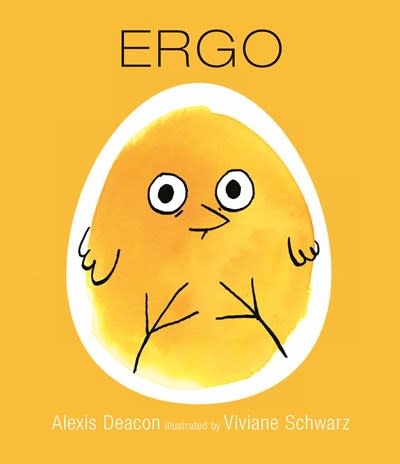 The creative team behind I Am Henry Finch offers a picture book Plato for little ones, as Ergo the chick, from inside her egg, contemplates the world—and her place in it.

Ergo wakes up and sets off to explore the world. The first things she discovers are her toes. Wiggle, wiggle. Then she finds her wings. Flap, flap. Then her beak. And her legs. She has discovered everything! I am the world and the world is me, she thinks. Until she considers the wall around her. Is that part of her, too? And is that noise from beyond the wall…something else? At once humorous and inspirational, this lighthearted foray by Alexis Deacon and Viviane Schwarz is for dreamers and philosophers, the foolish and the enlightened—a picture book experience told with simplicity and style.