Home » Erik vs. Everything 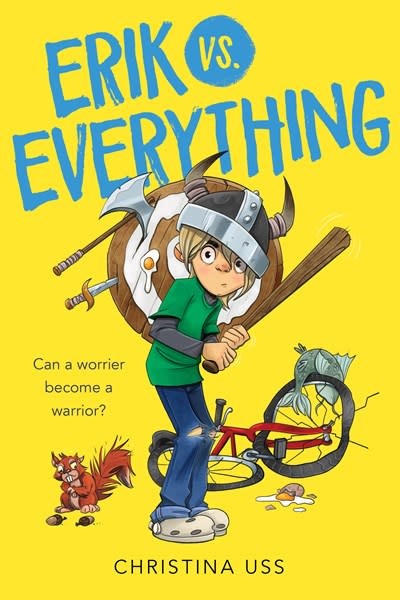 Nine-year-old Erik Sheepflattener’s life motto is Avoid Stuff, despite his family’s attempts to bring out his inner Viking. Can a worrier really become a warrior? In this silly, heartfelt, outrageously quirky novel for fans of Restart and Pay Attention, Carter Jones . . . why not be both?

Meet Erik Sheepflattener. Each member of his modern-day Viking-heritage family has a motto to live by. His parents have Family and Pride. His sisters have Conquer and Win. His grandfather has Turnip. But Erik is developing a motto he can truly believe in: Avoid Stuff.

Mostly, Erik’s fierce family ignores or discounts him, especially when he tries to say no. But while spending the summer with his rough-and-tumble cousins and older sister Brunhilde in Minnesota, axe-wielding Bru gets the idea to name and Conquer all of Erik’s fears. Will anyone hear him say no before it’s too late? And will Erik end up defined by his fears, or by his fearless family?

Erik vs. Everything is an adventurous, humorous, and heartfelt romp about finding your place, speaking up for yourself, and pursuing what you love . . . even when it scares you.

Christina Uss has written about bicycling and travel for many magazines and newspapers. Her first novel, The Adventures of a Girl Called Bicycle, was selected for the Texas Bluebonnet Award Master List, Maine Student Book Award list, Vermont's Dorothy Canfield Fisher list and was a Kirkus Reviews Best Book of the Year. It received starred reviews from Shelf Awareness, Booklist, Kirkus Reviews and Publisher's Weekly. Christina lives in East Longmeadow MA.